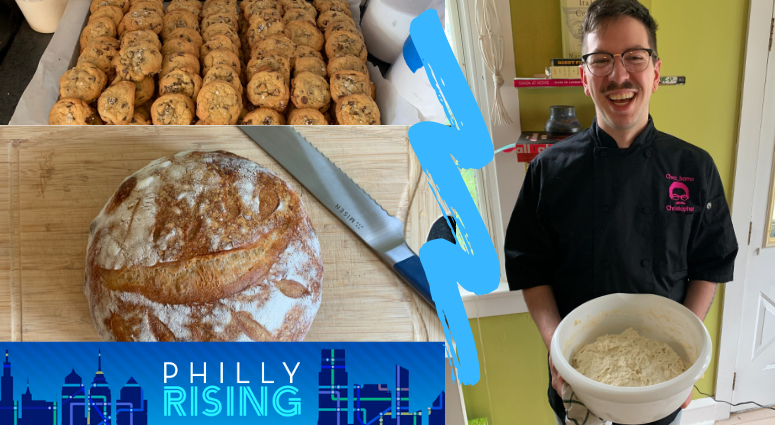 July 10, 2020 07/10/2020 11:52 am
PHILADELPHIA (KYW Newsradio) — Chris Donnay’s day job used to be teaching math and computer science at a K-12 school in Bryn Mawr. Lately, he’s been using those complex skills to measure up ingredients instead of grades.

"I was trying to figure out, like, 'I’m home all the time. How can I contribute to this movement?' and realized that everyone loves a good bake sale," Donnay said.

Howdy! @chez_homo is doing a bake sale to raise money for the following organizations: @innocenceproject, @uncf, @eji_org, @yearup, and BU's Antiracist Research and Policy Center. For $10, you can either order a loaf of sour dough or a batch of chocolate chip cookies. Just DM me and I'll hand deliver them to your home! Not doing shipments at the moment, but who knows. Since @adidonato works for @urbanoutfitters, all of your donations will be matched 3:1!!! #blacklivesmatter

As it turns out, Donnay was right — folks do love a good bake sale. In just two weeks they raised nearly $6,000.

"I never really thought the bake sale would blow up like this," he said. "The first week I didn’t set any limits on how much I was gonna make and ended up just baking nonstop all day all the time."

And that’s only selling his two specialties: sourdough bread and chocolate-chip cookies. But, he says, they’re not just any chocolate-chip cookies. "We’ve gotten messages that they’ve caused fights between significant others — because someone will say that it’s better than their girlfriend’s cookies, and then it causes a whole thing."

The recipe is the same one from when he first started baking around 6-years-old. Except now, he’s added a secret ingredient: "Our special twist-cover everything in sea salt." Or not so secret anymore.

Proceeds from the bake sale went to five racial justice organizations, including the Innocence Project, the Equal Justice Initiative, UNCF, YearUp, and Boston University’s Center for Antiracist Research.  “It feels like we’re part of a bigger movement. And it feels really cool to know that it was so easy to do something that has turned out to be so meaningful. And if there’s one thing I hope people take away it’s just that you can just do something and people will help you out.”

If you’re interested in Donnay’s sourdough bread or chocolate chip cookies, you’ll have to wait a little while. He says he’s headed to Ohio State University for a PhD program.

However, because classes are virtual during the COVID-19 pandemic, he says he’ll be back and baking in the fall.