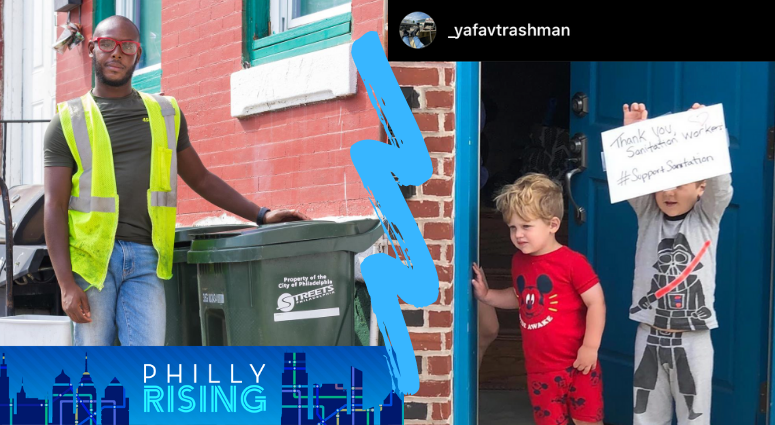 PHILADELPHIA (KYW Newsradio) — Like many things, COVID-19 has complicated normal routines for trash collection. But it’s also festered an even larger waste problem for neighborhoods, creating a lot of “trash talk” in the city lately.

As we’ve learned over the past few weeks, not all heroes wear capes or scrubs — some wear steel-toe boots, PPE in 90-plus-degree weather, and reflective gear that reads “sanitation” on the back.

Terrill Haigler, who has been a sanitation worker in the city for nearly a year, said he’s currently averaging 31,000 steps a day with the job that’s taking both an emotional and physical toll.

“With everyone being home, the numbers are like 30% more trash on the ground. You take sanitation workers who are dealing with COVID or quarantining. You got more trash and less people,” he explained.

Philadelphians’ frustrations with trash collection times and numerous misconceptions pushed him to create an Instagram account called ‘Ya Fav Trashman.’

“Everyone thinks sanitation workers are lazy, that we don’t want to work. That’s probably the main reasons I started the Instagram page. I just noticed there was a gap between the sanitation department and the public. Maybe (if) they understood what it was like, they would have a little grace and understanding and some patience,” he said.

Haigler started going live on Instagram, delivering information on trash pickups. He also created the hashtag #SupportSanitation, which has since blossomed into a movement.

“I take pictures, I show you piles. You’re complaining about me getting to your house but you’re not seeing this pile of 30 bags. I think once people started seeing, they realized it is a little tough. I think that’s when the grace and understanding started. A relief, calmness swept over the city,” he said.

In just a few weeks, his Instagram account has garnered nearly 20,000 followers, and a T-shirt campaign has raised around $25,000 for PPE for sanitation workers.

“I’ve had so many people reach out and say, ‘hey we just want to donate.’ A guy donated 500 masks. The public has come together, buying water and Gatorade and water ice and signs. It’s like in the last 50 years sanitation workers have never felt this much love,” he added.

Haigler said the overwhelming support has boosted morale for the team and they are extremely grateful. However, his ultimate goal is to start the conversation for sanitation workers to be deemed as essential and get the hazardous pay they deserve.

“There’s no way I can do my job without coming into contact with something hazardous; I’m taking out people’s trash. For example, when I get to work in the morning, I don’t get a list of houses that have tested positive for COVID on my route.”

“I’m in these streets. I just want to start the conversation,” he said. “We’re essential and it’s been long overdue for people to kind of understand and (for us to) get the respect we deserve.”