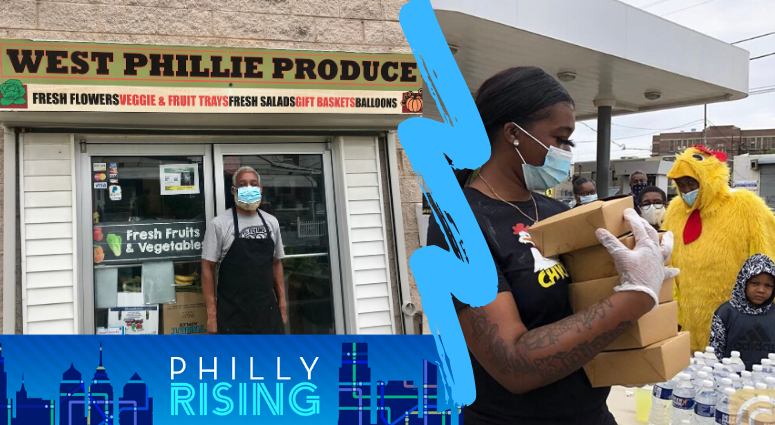 June 5, 2020 06/05/2020 9:30 am
PHILADELPHIA (KYW Newsradio) — In light of the recent looting in West Philadelphia, many businesses in the area have been closed and boarded up. But a few places were spared from the damages, and they’re trying to be a beacon of hope during troubling times.

“We have a lot of the seniors (that have) been coming in to get their apples, their bananas, and stuff like that,” said Arnett Woodall, the owner of West Phillie Produce located near 62nd and Ludlow streets.

He said with grocery stores and other businesses in the area closed, his store is the only place open for elders and families in need to find produce nearby.

“We’re going to still be doing our feeding program three days a week, which we’ve been doing since we’ve been open actually, 11 years. We’ve been feeding the community. Before it goes bad, it goes to the community because we have perishables being a fruit and produce store,” he said.

Woodall also has a partnership with Whole Foods, which helps him distribute even more meals to families in need.

Garry Lumbers, co-owner of Chick-A-Boom restaurant near 48th Street and Lancaster Avenue, said they also feel blessed and humbled — the gas station connected to their restaurant was looted, but their business was also spared.

“We love this neighborhood and there’s not anything that we wouldn’t do for it,” said Lumbers.

Manager David McNeil said that’s why they decided to do a food giveaway for the community.

“Even the store next door to us was trashed and a lot of the places in the community were closed, so we came up with the idea that instead of opening the store and charging people through this rough time, we might as well open up and give out free meals and invite people to come along,” McNeil said.

McNeil said they fed about 150 people the day after the riots and they’re eager to help out more.

“I would like to say that I’m glad that we got to help the community and we would like to challenge others to do the same,” said McNeil.

sports
Why Andy Reid sees Brett Favre in Patrick Mahomes
sports
Twins slugger Nelson Cruz wore a bathrobe in the dugout, and it was glorious
news
Trump: It's a 'shame' US COVID death toll tops 200K, would have been 2.5M 'if we didn’t do it properly'
music
Megan Thee Stallion, Selena Gomez, and more get touching tributes for the 'TIME' 100 list
music
H.E.R. is making history with this new guitar
news
'My dad was not a nobody': Woman known for DNC speech fires back at Trump's COVID-19 remarks