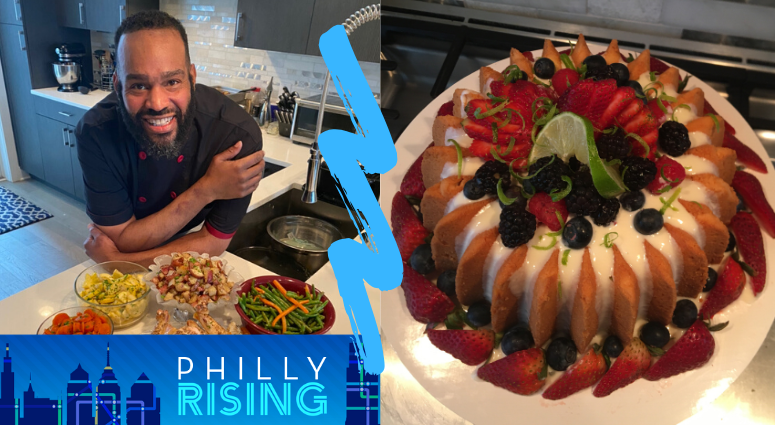 Not to be confused with the Hall-of-Famer football legend, this Rice is more known more for his big personality and lavish homemade desserts.

“I am a hospitality professional to my core. My personality radiates. I wake up in the morning at 5 a.m. just like this,” Rice said.

Rice spent more than 20 years in the hospitality and lodging industry. That big personality helped him succeed, moving him from coast to coast, and eventually soaring to high ranks in management.

Most recently, he was general manager at a Center City hotel, but that chapter came to an end in January, when he lost his job.

He noticed how many parents were overwhelmed with the new stay-at-home life, so he decided to share his talent in the kitchen to help others.

“OK, let's make three to four quiches up on a Sunday in advance," he said. "Let’s show you how to freeze those, so you can pull them out, and daily have a hot meal for your kids."

He also started giving out his homemade cakes and food for free at hospitals, fire stations and hotels.

A friend then recommended he start selling his products, so Rice started using Facebook groups to advertise his work. Now his lavishly decorated cakes and savory dishes are a hot commodity.

In only two months — and during a pandemic — the business has outgrown his personal kitchen.

Rice credits his southern roots and his mother’s recipes for his success.

“My biggest seller is probably my pound cakes. My mother is a pound cake queen. She’s got 60 recipes in the back of her head. And all I’ve done is take those things that I watched my mom do in that kitchen for all of those years and I just do it for other people now,” he said.

And his two main ingredients, he said, are love and joy.

He’s looking to purchase a commercial space soon to help the business expand.

“Someone fired me six months ago from a job I love. And to be able to now think about that I can hire somebody again and maybe create a culture like the one that I was able to create in the hotels I managed for all those years is just special,” he said.

For now, clients contact him using Facebook. But he’s looking forward to expanding, with plans of having his website up and running in the next couple of weeks and hire some assistance.

Rice admitted that it’s scary no longer having the security of a corporate paycheck, but he relies on his faith and giving spirit to keep him persevering.

“I believe that if you give, it shall be given unto you. I started giving out food for free. I was in my house bored, didn’t care about the money and it has now potentially launched my next business. If you have it in you to be successful, you’ll figure it out for whatever you have to do. No one is going to stop me. Nothing is going to stop me,” he said.