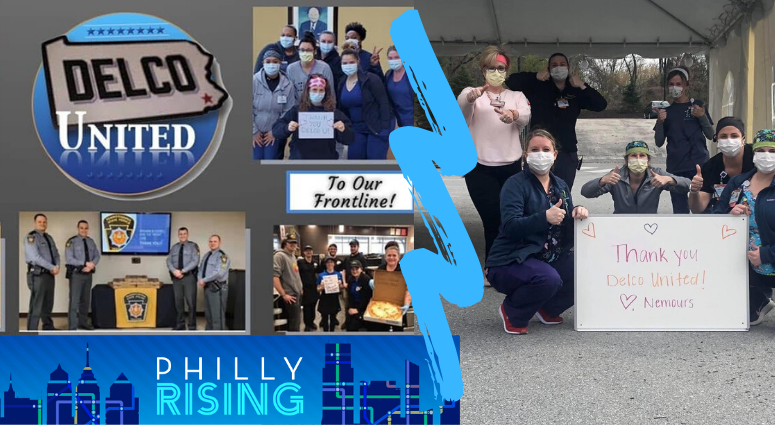 April 24, 2020 04/24/2020 8:00 am
PHILADELPHIA (KYW Newsradio) — It all started with one Facebook post. Dayna Cavanagh of Delaware County asked people to chip in to help send lunch to her mother’s hospital department on the frontlines of COVID-19.

“None of it was for recognition or for credit. It was to send lunch one day and it turned into something really big,” she explained.

The support was so overwhelming that it led to the creation of a Facebook group called Delco United.

People in the group donate money, and Cavanagh organizes food deliveries to frontline and essential workers.

“I’m running the group, but this Facebook page would not even exist without these members and without their donations that they send in. It is truly a group effort,” Cavanagh said.

“Some places are just so excited that they were even thought of. They’re grateful. We have a lot of places that we’ve donated pizza to and then the next day I get donations from them that they want to pay it forward. So now you have frontline workers supporting other frontline workers all through a group that was started without the intention of becoming what it is,” she said.

Local businesses have also been inspired to get in on the giving — the group recently partnered with an extermination company called Zap.

“The owner of the company last week decided to purchase $5,000 in gift cards to all local businesses, so that will be another way that we’re going to start giving back — giving out gift cards to the respiratory teams throughout Delaware County,” she said.

Cavanagh, a mother of two young boys, said managing the donations and the deliveries has practically become a full-time job.

Her husband, Cyle is a police officer, and she said he’s been a great help and support as her newfound passion keeps her busy.

“It’s a job but it’s a very rewarding one,” she added.

She has no plans on stopping anytime soon — she’s already planning a blood drive with the Red Cross and is thinking of other ways to keep the giving going once things go back to “normal.”

“As long as we have the outpouring of support and the willingness of people wanting to be a part of it, I’ll keep going as long as we can,” she said.