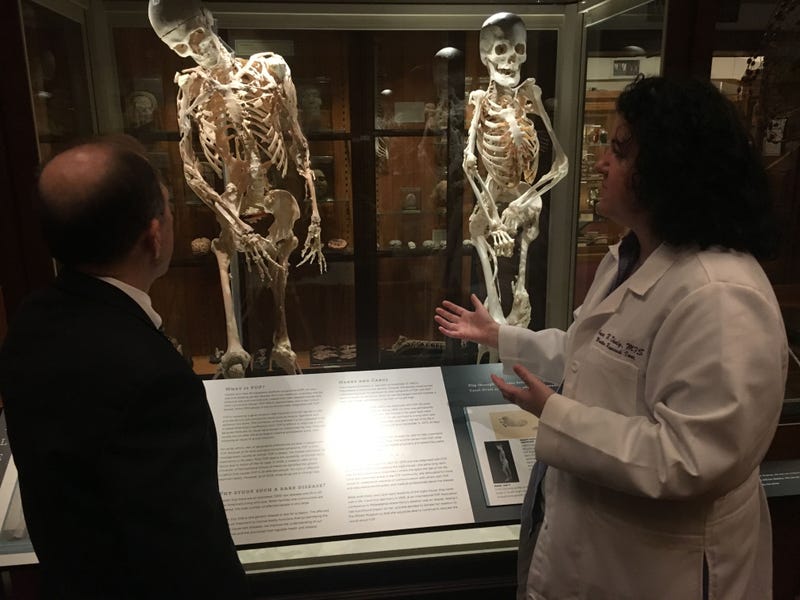 That’s what the Mütter Museum had to figure out, and quickly, after Carol Orzel left her body in the care of the collection of medical oddities.

Carol Orzel was 59 years old when she died of fibrodysplasia ossificans progressiva, or FOP.

It’s an incredibly rare and disabling bone disease that causes the body to grow a second skeleton.

“Carol said to me, that when her time comes — that’s the way she put it, ‘when my time comes,’ ” said Dr. Frederick Kaplan, her FOP doctor for more than 30 years. “She said, ‘I would like to be at the Mütter Museum with Harry.’ And her wish is fulfilled.”

After a delicate seven-month process, Orzel’s skeleton is now in the Mütter Museum, right next to the skeleton of Harry Eastlack, a man who died of FOP in 1973. One of the reasons Carol wanted to donate her skeleton was because she had visited the museum and seen Eastlack’s skeleton.

Listen to the story of how the Mütter Museum transformed Orzel’s body into a skeletal exhibit in KYW Newsradio’s original podcast Scroll Down.
Scroll Down told the first half of the story of Orzel’s life and legacy last year, after her memorial service. Listen to The Skeleton in the Museum, Part 1 below:

sports
‘Those are not f**king strikes!’ Aaron Boone delivers epic sequel to ‘savages in the box’
sports
Watch: Ronald Acuna blasts home run nearly 500 feet
sports
Ravens DC on Mahomes: ‘They could have paid him a billion, I’d still think he’s underpaid’
news
Trump addresses reports he's choosing Amy Coney Barrett for SCOTUS: 'I haven’t said it was her, but she is outstanding'
news
Amy Coney Barrett expected to be Trump's pick for Supreme Court: Reports
sports
Is Rajon Rondo a Hall of Famer? Kendrick Perkins and Brian Scalabrine weigh in