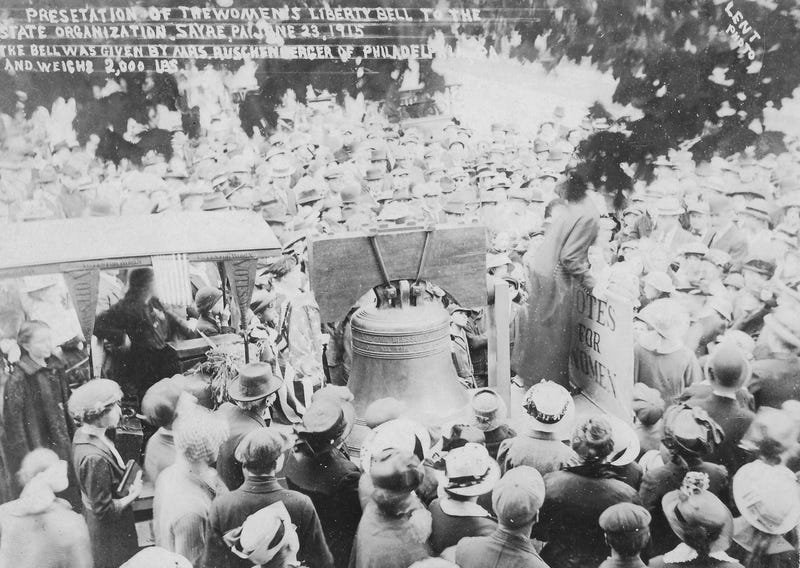 August 14, 2020 08/14/2020 11:13 am
PHILADELPHIA (KYW Newsradio) — Public protests were a common method to drum up support for the women’s suffrage movement, but one group, in particular, sounded the alarm in a more literal way.

In the early 1900s, suffragists used a symbol of freedom to gain public opinion toward women’s right to vote, which University of Pennsylvania professor Kathy Peiss said was done by any means possible.

“There was this bell called the Justice Bell, and it was a replica of the Liberty Bell,” she said. “It was supposed to be a women’s Liberty Bell.”

It was commissioned by Katherine Wentworth Ruschenberger in 1915, just as the movement was really picking up speed.

“It was driven all throughout Pennsylvania on a cart,” said Peiss, “and it went to all of the counties, and it was there as a sign or a symbol as a demand for women’s suffrage.”

However, the bell remained silent.

“The clapper was held still so that the bell couldn't ring, so on one hand it was a way for the suffragists to say that we’re not that radical, all we’re asking is to be included in the meaning of these symbols,” she explained. “And at the same time, they are radical because they were critical of the symbols.”

Chester County archivist Laurie Rofini said the goal was to get enough votes for a referendum in the state.

It took another five years before the 19th Amendment was ratified, thanks to the 36th state to ratify it in 1920 — Tennessee — thus securing passage of the amendment.

“A month later, on Sept. 25, the (Justice) Bell was taken behind City Hall — it was set on Independence Square right behind the building — and it was rung 48 times for each one of the 48 states (at the time),” Krulikowski said.