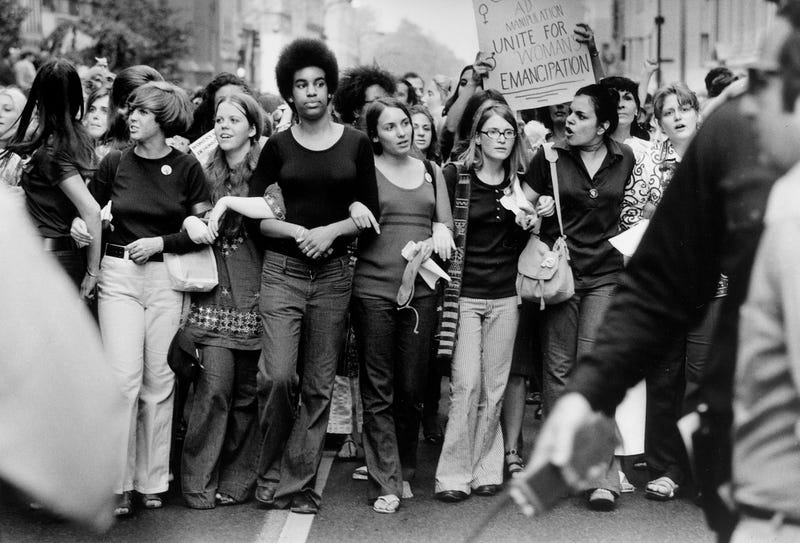 “The women’s war to get the vote lasted 72 years,” explained Coline Jenkins — the great-great-granddaughter of abolitionist and suffragist leader Elizabeth Cady Stanton. “She said if you don’t have the right to vote, you don’t have the fundamental right of citizenship.”

Stanton helped organize the Seneca Falls Convention of 1848 and wrote the Declaration of Sentiments, which launched women’s efforts to gain access to higher education, the right to their own wages and children, and the ability to enter contracts, to name a few.

“If you got married, in the eyes of the law back then, you would be dead,” said Jenkins. “They wouldn’t recognize you. They’d only recognize your husband.”

Stanton didn’t live to see the 19th Amendment become law, but her daughter, Harriot, carried the cause forward. In fact, generations of Stantons continued the fight for women’s rights.

“When the women’s movement failed to really make a difference and to be inclusive, that chance is lost for decades,” explained Dr. Erica Ryan, history and gender studies professor at Rider University in Lawrence Township, New Jersey. “In the immediate aftermath, it becomes obvious that many southern states were still going to be able to discriminate against women based on race and class with poll taxes and literacy tests and grandfather clauses.”

Some states and American territories even prevented Black and Native American women from voting. Asian Americans were barred from citizenship altogether because of the discriminatory immigration laws of the 19th century.

“There was a lot of expediency that white women got from selling women of color down the river,” Ryan noted.

However, white women failed to capitalize on the power they won. Initially, men were scared that they would have to compete with women.

“They’re afraid that women would vote as a bloc in their own interest,” she added.

None of those fears materialized, and by 1924, it was clear that women would not organize politically.

“They voted as Democrats and Republicans, like their husbands and their fathers,” Ryan said.

Birth control was also illegal, so women had little control over when they had children or how many, thus preventing them from seizing many opportunities of the suffragist mindset.

Like suffrage, which was born from abolition, women’s liberation was deeply influenced by African-Americans’ push for civil rights. But this time, women focused on economic freedom.

Subsequently, the National Organization for Women was formed in 1966. Modeled after the NAACP, their focus was changing the law from the inside and removing the legal and cultural barriers that oppressed women.

Title IX, which prohibits gender discrimination in education, passed in 1972, as did the Equal Employment Opportunity Act that same year, which gave the federal government the right to sue if an employer discriminated based on race, color, religion, sex, or nation of origin.

A big win followed with the U.S. Supreme Court’s 1973 ruling in Roe v. Wade, which held that the Constitution protects a pregnant woman’s liberty to choose an abortion without excessive government restriction.

Then in 1974, the Equal Opportunity Credit Act passed, allowing women access to credit without their husbands.

“A lot of the women within the second wave come out of the civil rights organizing,” Ryan noted. “They realize that the first time around, the women’s rights movement was racially exclusive, so these second-wavers try to do things differently — but they are not terribly successful.”

Similarly, as second-wave women won major victories toward women’s liberation, the face of the movement — like suffrage — remained relatively white.

“The leadership of Black women is erased and ignored,” said Jovida Hill, executive director of the Mayor’s Office of Engagement for Women and the Philadelphia Commission on Women.

The anti-slavery movement centered on freedom for Back people as a whole, as did the civil rights movement. But in both efforts, oppression of Black men was the main focus, and, in many cases, Black women endured acts of sexism.

Women’s suffrage — and later, women’s liberation — continued to center around white, elite women, once again leaving Black women to fight to find their own place in the movement.

“We bring everything that we are into our feminism,” Hill said. “We have never chosen gender ahead of race.”

Hill believes the renewed battle for gender rights may be broad enough to include all women. She credits this awakening to a shift in Black women’s attitude, looking toward others in leadership, like vice presidential candidate Sen. Kamala Harris.

“We are owning it,” said Hill. “We are unapologetic, and we are writing our own narrative.”