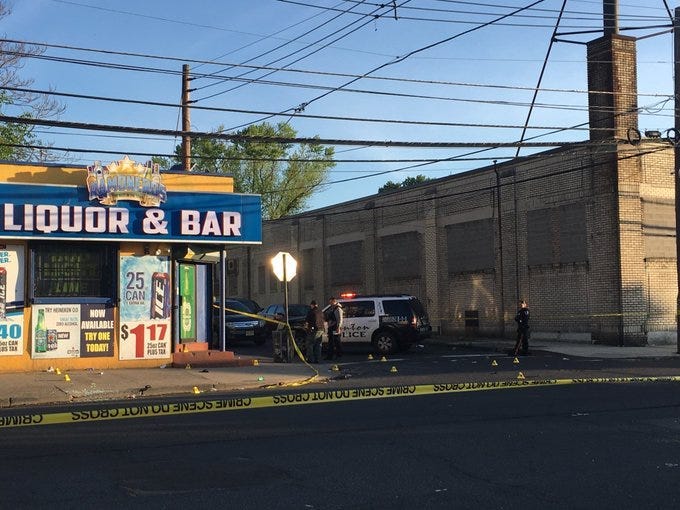 TRENTON, NJ. (KYW Newsradio) — There's still no motive after ten people were injured in a shooting in Trenton overnight. Authorities believe at least two people fired over 30 shots outside a bar.
At a press conference Saturday, police say, five men and five women were injured during a shooting outside of Ramoneros Liquor and Bar on Brunswick Avenue and Middle Rose Street.

Police still have some of Brunswick Ave blocked off here in Trenton. 10-ppl were shot outside a bar around midnight. Victims were 5 men and 5 women. No word on their conditions. ⁦@KYWNewsradio⁩ pic.twitter.com/IoBlCAB0wS

One of the bullets ripped through the street sign for Brunswick Ave @KYWNewsradio pic.twitter.com/u5XfnE8znv

According to police, the victims are between the ages of 23 and 36-years-old. Officials also say they all expected to be okay, and some of them have since been released from area hospitals.

"What we do know is out of the ten victims we had, eight of them were Trenton residents, I believe one was from Ewing and another one from Willingboro, just out for a night of fun and then it turned into a night of violence,” said Trenton Police Director Sheilah Coley. “These are the things we are not going to continue to tolerate in Trenton."

Coley says New Jersey state troopers also responded to this shooting, and that she would like to see them continue to work with Trenton police to fight crime in in the city.

Trenton’s Mayor Reed Gusciora used this shooting as an example of why he wants to see stricter gun laws in the country.

"This is indicative of gun violence throughout America and ultimately it's going have to be the federal government that's going to have to step up to the plate," he said.

Gusciora says he wants all Trenton neighborhoods to feel safe and that he and police are going to have to work harder to make that happen.