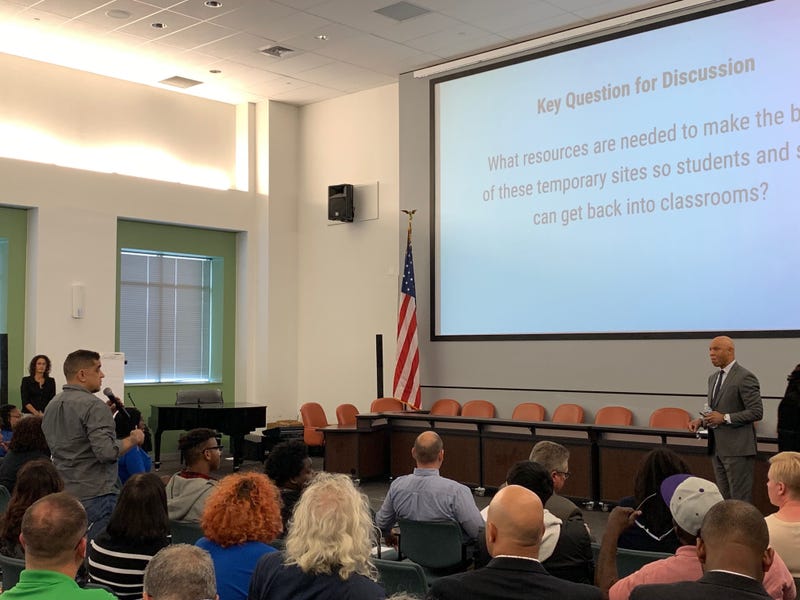 PHILADELPHIA (KYW Newsradio) — School District of Philadelphia Superintendent William Hite met with parents and students Monday morning and evening at district headquarters to discuss the temporary closing of Ben Franklin High and Science Leadership Academy and the immediate future of the 1,000 students who are meant to attend classes at the joint campus.

Students are going to be out of the building they share until after the winter break, on Jan. 2, while asbestos removal and construction in their building continue.

Hite opened the morning meeting with an apology over the construction delays.

"Here's a project that we started, and we didn't get it right," Hite said.

"There are neighborhood cultures that you guys aren't thinking about that you need to think about," said one parent.

"Our city is in a war," said another. "So our kids can't go anywhere and everywhere. It's not even an option for some."

Hite says the district has talked to Community College of Philadelphia, the University of Pennsylvania, and even Hahnemann Hospital.

"It's not ideal. None of this is ideal. And we're trying to get back to some normalcy for students," he said.

“ I don’t want cancer from going to school” says student from school building shut down because of asbestos @KYWNewsradio @PHLschools pic.twitter.com/4UcspS5dTf

Naja Johnson just wants to know when she can go back in the classroom.

"I'm just really worried for how is my education going to change, am I still going to be out of school, just sitting in bed, basically being a homeschool child," Johnson said.

A parent-teacher task force was formed during the town hall to come up with other options. Hite said the district wanted to have students in a temporary home by this Thursday, but he admits that may not happen.

The building that houses both schools in the Spring Garden neighborhood has been closed to students and staff since last Tuesday.