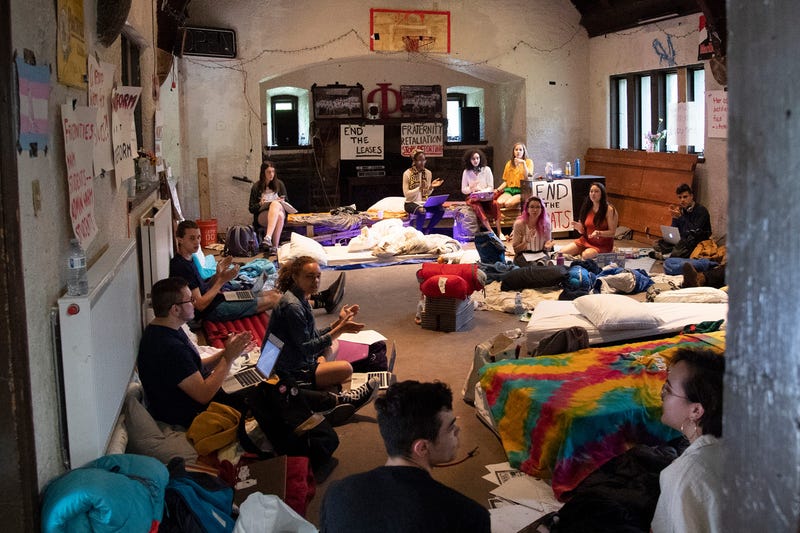 May 1, 2019 05/01/2019 3:25 pm
PHILADELPHIA (KYW Newsradio) — Two Swarthmore College fraternities are shutting down following the leak of documents that portray prior frat brothers as being involved in rape and sexual misconduct, and using racist, homophobic and misogynistic language.

The controversy surrounding the two fraternities — Phi Psi and Delta Upsilon — led to days-long campus sit-ins, where students urged that the frats should close.

Magda Werkmeister, a freshman at Swarthmore, was one of the many students who sat in at the Phi Psi fraternity house on campus. After several days, the group heard that Phi Psi and Delta Upsilon voted to disband Tuesday night.

"The room was incredible," Werkmeister recalled. "We were all jumping for joy."

Both fraternities were facing a lot of backlash over the leaked documents, which were published in student publications. The documents, ranging from 2013 to 2016, made references to derogatory remarks, a “rape tunnel,” and a “rape attic.”

Current members of both fraternities distanced themselves from the alleged actions of past members.

But in the announcement to disband, Phi Psi said, “The wounds are too deep to repair.”

Delta Upsilon said, “Disbanding our fraternity is in the best interest of the Swarthmore community.”

Swarthmore President Valerie Smith said she respects the fraternities' decisions, and the school will go through with an independent investigation.

Werkmeister, however, said more is needed.

"There are a lot of things that we’re also working to end on campus and to kind of re-imagine how to have a healthy community," she added.