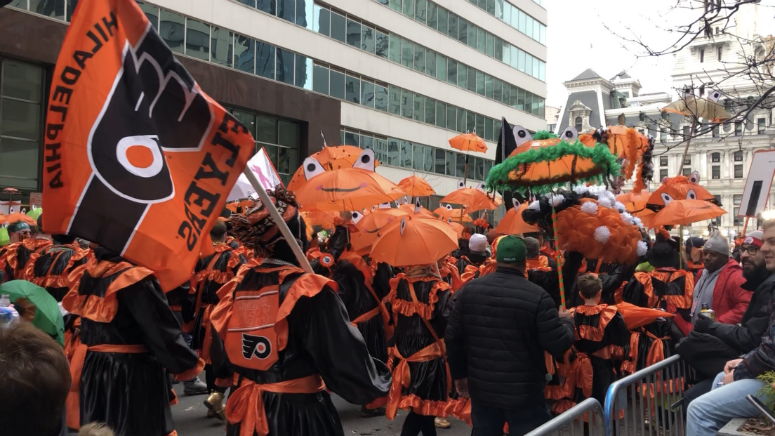 January 2, 2020 01/02/2020 12:00 am
PHILADELPHIA (KYW Newsradio) — Philadelphia welcomed the new year the exuberant way it always does: with thousands of people lining South Broad Street to watch the mummer's strut and perform. But an unfortunate incident marred the festivities.

The largest club in the parade division known as wenches was disqualified when at least two of the marchers violated a long-standing ban on wearing blackface in the parade.

The club, Froggy Carr, dressed with a Flyers theme. Their costumes were orange and black, and most painted their faces a combination of orange, black and white, except for the marchers who wore full faces of black paint.

Blackface and Trump signs spotted at the #Mummers parade! pic.twitter.com/tuMK251zsX

Member Chuck Smith says more than a thousand people march with the club on New Year's Day, many nonmembers.

"It's just hard to control everybody wearing the same makeup and all that," he said.

The two who wore blackface told CBS3 it was just part of the costume.

"We're all in blackface, it's not about that. Black and orange, getting Gritty with it," they said.

But Mayor Jim Kenney is accepting no excuses. He tweeted that it was "abhorrent and unacceptable" and that not only was Froggy Carr disqualified, but the city would be exploring additional penalties.

The use of blackface by someone affiliated with Froggy Carr today was abhorrent and unacceptable. This selfish, hateful behavior has no place in the Mummers, or the city itself. We must be better than this. The group was disqualified and we will be exploring additional penalties.

"Given the choice to use orange, white or black face paint—or any combination of the three—this individual chose to do a full face of black paint. In 2020 there is no excuse for not understanding why that is a problem," a city spokeswoman said in a statement.