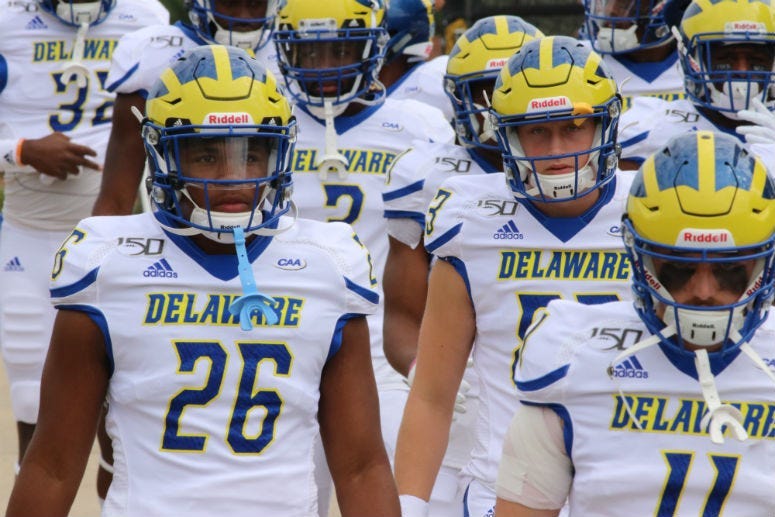 October 16, 2019 10/16/2019 9:09 pm
PHILADELPHIA (KYW Newsradio) — After a blowout loss last week at Elon University, the Delaware Blue Hens will look to bounce back this Saturday when they welcome the University of New Hampshire to Newark.

"It was a close game at the half (Blue Hens trailed just 7-0)," Delaware head coach Danny Rocco told KYW Newsradio. "We came out in the second half and we turned the ball over, threw a pick-six and never really slowed them down with our defense."

The Blue Hens also had to deal with the loss of starting quarterback Nolan Henderson, who was hurt after a targeting call in the first half and is currently in the concussion protocol.

"He will see the doctor (Wednesday) to see how he continues to progress with the protocol," Rocco said.

Redshirt senior Pat Kehoe, who began the season as the starter, relieved Henderson and threw for 175 yards and a touchdown to go along with an interception.

New Hampshire is 4-2 this season (3-0 CAA) and ranked as high as 22nd in FCS. After losses in their first two games of the season, the Wildcats have ripped off four victories in a row.

Their most recent win was this past Saturday as they held off Stony Brook University at home, 20-14.

The Wildcats defense has been especially impressive this year, holding opponents to just 16.2 points per game.

"They play really hard and they are really sound in what they do," Rocco said of the New Hampshire defense. "I think their secondary is veteran and experienced. Their corners are good, they are veteran players and they're talented. So there aren't a whole lot of plays over their heads. There aren't a whole lot of plays that end up for quick strike scores. So when you're good on the back end, it forces people to have to drive the ball a little bit more and be a little more efficient offensively with their drives."

Last year, Delaware went up to New Hampshire and grabbed a 38-14 win.