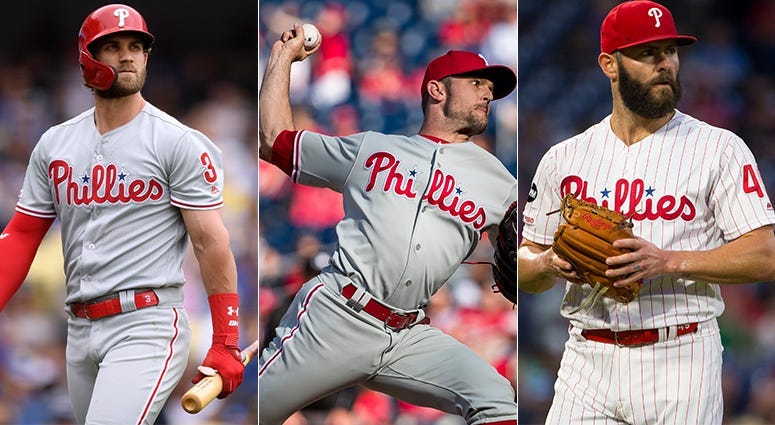 A 47-and-43 record at the All-Star break isn't what most people expected. It leaves the Phils in third place in the National League East, heading to Game 91 — half a game back of the second-place Nationals and six-and-a-half behind the first-place Braves.

Not good, especially factoring in the money spent and moves made this past off-season.

The most glaring indictment on this team was their lack of All-Stars. Only J.T. Realmuto represented the Phils, while Bryce Harper, Rhys Hoskins, Jean Segura and Aaron Nola got four days off. Meantime, Harper was seen on All-Star Game promotions and signs in Cleveland, the host city of this year's mid-summer classic. He was worthy of being an All-Star, but baseball and its fans thought otherwise.

The Phillies simply aren't making enough noise. The Fox telecast spoke about them for about two minutes when Realmuto came to the plate as a pinch hitter in the seventh inning — the last position player on the National League to get into the game. If you wanted to watch the only Phillie play in this ballgame, you needed to stay up until 10:08 for a game that started shortly after 8 p.m.

Manager Gabe Kapler is an optimist, which isn't surprising. He has no choice but to remain positive about this team so they can perform at the levels they're capable of. It's why he's feeling good about the second half of the season after his Phils won eight of their last 13 games going into the break.

One glaring note about that stretch: Six of those victories were against the woeful Mets. There's more for the Phillies to prove. Here's what needs to happen if there's going to be a Red October in Philadelphia for the first time since 2011.

Harper needs to play like the superstar he's paid to be

To be perfectly clear, Bryce Harper isn't overpaid. This isn't a "he's not living up to the contract" take. It's slightly less than that.

But, his .253 average is underwhelming, as are his 16 home runs. He strikes out way too much.

Harper isn't getting overpaid, but he's not playing like the superstar he's supposed to be. When he does, as was the case in the first week of the season, the Phillies are an extremely fun team that never feels out of game, regardless of the deficit. A successful Harper sets the tone for the rest of the ball club.

Nola can't be the only reliable pitcher in the rotation

While Harper may be the lead point in this column, he's not the Phillies' biggest problem. It's their starting rotation, as Nola is the only one you can rely on every five days right now. Zach Eflin has showed flashes, but also struggled recently. Nick Pivetta is very up and down. Same goes for Vince Velasquez, who's spent time in the bullpen this season. Jake Arrieta may not be healthy enough.

General manager Matt Klentak hasn't done much to address the starting rotation the past couple of seasons. The organization has hoped the young guys like Pivetta, Eflin and Velasquez would develop like they hoped they would. There's still time, but not that much. It would serve the Phillies well if Klentak made a move or two by the July 31 trade deadline to help the rotation.

Bullpen must get healthier

One area Klentak has invested a decent amount of money in during the Kapler era is the bullpen with guys like David Robertson, Pat Neshek and Tommy Hunter. The latter has recently made his season debut; Neshek has missed most of the season, as has Robertston.

These are pitchers Kapler was supposed to depend on in high-leverage moments. The same goes for Seranthony Dominguez, who went on the injured list in June because of UCL damage in his right elbow, and Victor Arano, who's recovering from elbow surgery back in May.

Even though the bullpen has been hit hard by injuries, it's still managed to perform more admirably than the rotation, thanks to guys like Hector Neris, Adam Morgan, Jose Alvarez, Juan Nicasio (who's also injured), J.D. Hammer, and Edgar Garcia. Hammer and Garcia came from the minors, and while they've done a decent job, it's never good when a team needs to rely that much on its farm system.