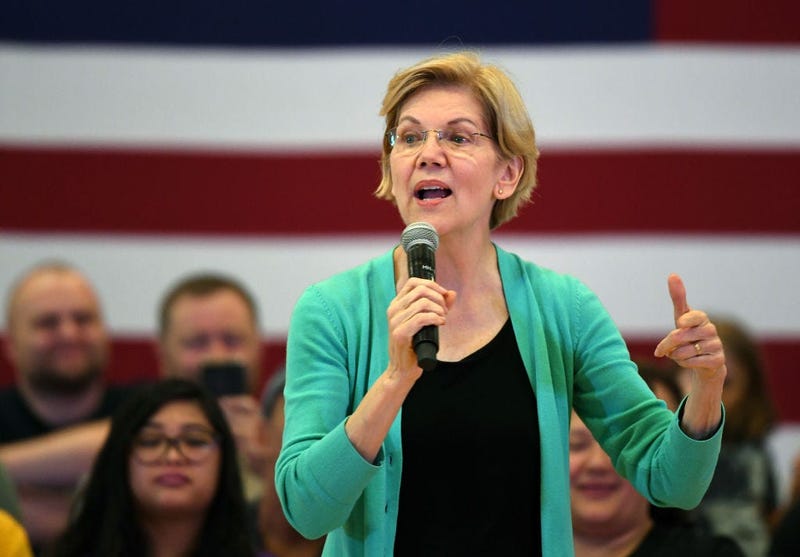 July 14, 2019 07/14/2019 1:08 pm
PHILADELPHIA (KYW Newsradio) — Four of the Democratic primary candidates were in Philadelphia late Saturday afternoon for the 2019 Netroots Nation Conference to further discuss their platforms and take questions from the crowd of thousands of progressive organizers gathered at the Pennsylvania Convention Center since Thursday.

Sen. Elizabeth Warren seemed to be the crowd's favorite, drawing the loudest cheers. She faced a wide array of questions, including what to do about undocumented immigrants at the southern border, to which she responded saying the U.S. needs an overhaul of it's immigration system.

"And it starts with the premise that immigration is good for this country. It makes us stronger. It's makes our economy stronger. And it ties us to families all around the world," she said.

Washington Gov. Jay Inslee led off his portion speaking about the importance of building a new clean energy economy, but as we do that, Inslee says it's important that unions are rebuilt along with it.

"So that these new millions of jobs in clean energy are union jobs so we can finally get a pay raise for the half of Americans who are producing more every single hour and day, they ought to be able to be benefiting from their productivity increases, not just the millionaire class," Inslee said.

Inslee also focused much of his time touting his record of fighting the Trump administration on various policies such as the Muslim ban.

New York Sen. Kirsten Gillibrand says healthcare "must be a right" and not a privilege for all Americans, and if elected president, she promises to make that and a single-payer system a reality, as it's an issue she says weighs heavily on the minds of almost all Americans.

"Imagine the fear, the terror you are feeling that you cannot protect your own child. That is what millions of Americans feel everyday, and when President Trump attacks pre-existing condition coverage, when he attacks the ACA, he's literally creating anxiety and fear across the country," Gillibrand said.

Gillibrand says she would eliminate lobbyists and move to a publicly funded election system, while also letting people buy in to Medicare at a price around four or five percent of their income.

From there, the move to a single-payer system would be an easy one by making it an earned benefit.

Former Housing and Urban Development secretary Julian Castro took on the issue of gun violence and the incredibly high rate of deaths in the U.S. associated with guns.

"It makes you wonder what in the hell is wrong with our country that we have so many more deaths because of gun violence than anywhere else, and part of the answer, clearly, is that we need common sense gun reform in our country," Castro said.