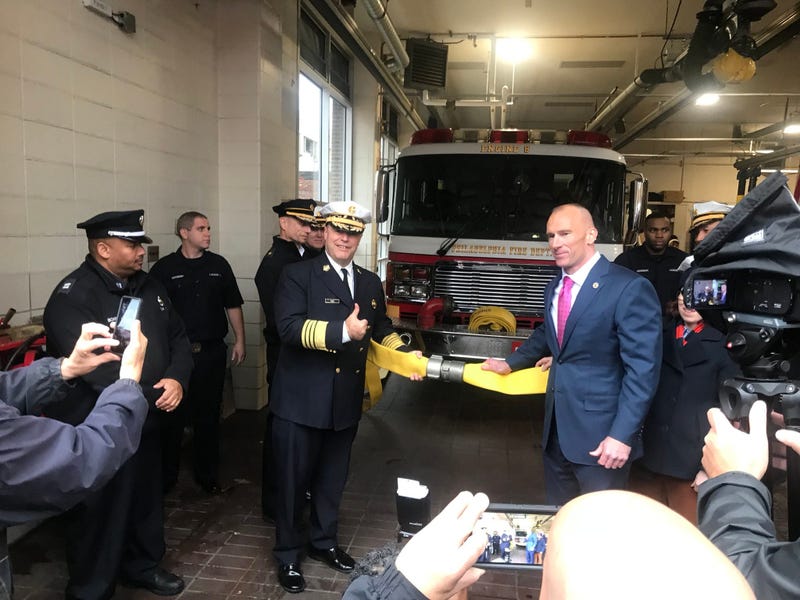 PHILADELPHIA (KYW Newsradio) — The Philadelphia Fire Department is reopening four of the seven engine companies that were decommissioned nearly 11 years ago during the recession.

All four companies will be reopened by 8 a.m. Saturday.

The engine companies include Engine 1 at Broad and Fitzwater streets in South Philly, Engine 14 at Foulkrod and Darrah streets in Frankford, Engine 39 at Ridge Avenue and Cinnaminson Street in Roxborough, and Engine 8 at Fourth and Arch street in Old City.

Engine 8 was the first to officially return Friday afternoon, and many were at the ceremony to show their support, including Tabatha Adams, who lost her father in a Northeast house fire in February.

"I do think it's very important we have them in all communities, within seconds. Within seconds. Cause those seconds can save someone's life. Fire spreads very rapidly," she said.

"I feel I kind of owe them because they rescued my grandfather," she added. "I know they weren't able to get with my dad and they live with that, you know, and they deal with that every day of their lives. They risk their lives to just to be able to go try to save someone and that's a big deal to me."

BREAKING: After nearly 11 years @PhillyFireDept officially reopens Engine 8 in Old City. One of four engine companies that will return to Philadelphia neighborhoods. Fire response time is expected to improve city wide with the reinstatements @KYWNewsradio pic.twitter.com/S0QZvjIxJI

Fire Commissioner Adam Thiel says it's been a team effort from the city and the Federal Emergency Management Agency, and these engines will have a major impact on response times.

"We got a federal grant for about half the cost over three years and then city funds are being used to cover the balance. This is a really important encore service and these engines, while certainly will provide immediate service around the firehouses where they are located, they actually help strengthen our entire system," he explained. "So in reality, they'll be helping us provide improved service 24/7, 365 (days) everywhere across our great city."

REOPENING ON SATURDAY! We are thrilled to restore this critical fire/EMS service to neighborhoods across the city. Please join us in welcoming back these engines! Details --➡️ https://t.co/z1FzcuOC4N pic.twitter.com/VBHc6aD1ff

The commissioner says 121 new EMT certified firefighters graduated last week, and a number of them will help the department restore the four engine companies.

The public is invited in welcoming back the companies.

The fire department continues to work toward restoring the remaining three companies: Engine 6 in Port Richmond, Ladder 1 in Francisville and Ladder 11 in South Philadelphia.