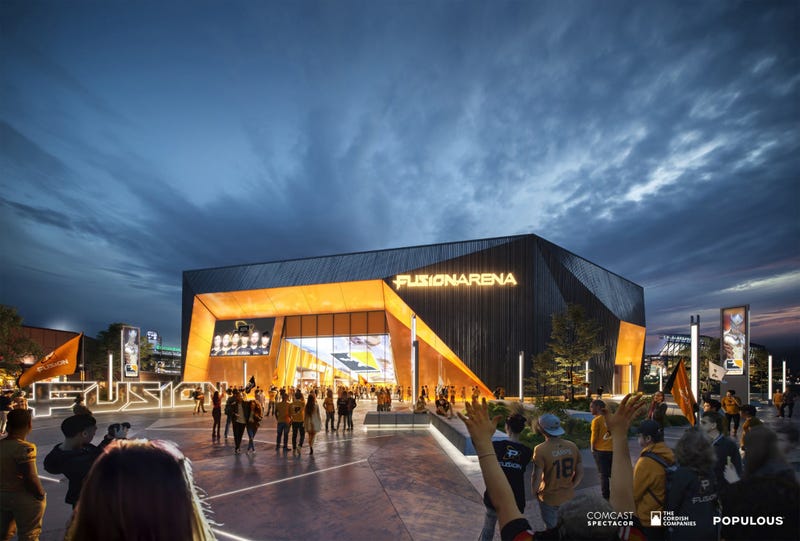 PHILADELPHIA (KYW Newsradio) — A new neighbor is getting ready to move in to the South Philadelphia Sports Complex.

Fusion Arena, a $50 million project, will be the home of the Philadelphia Fusion, the city's e-gaming team that competes in tournaments and leagues around the globe.

The 60,000-square-foot facility, a partnership between Comcast Spectacor and The Cordish Companies, will sit adjacent to Xfinity Live!

The 3,500-seat complex is the first of its kind in the Western Hemisphere, complete with an 85-foot LED screen and USB-integrated seats, according to Comcast Spectacor and Fusion Chief Business Officer Joe Marsh.

"It's huge. It kind of legitimizes what e-sports and gaming has become," he said. "It's not just a hobby anymore."

The arena will sit right in the middle of the South Philadelphia Sports Complex, which is already home to the Eagles, Phillies, Flyers and Sixers.

From teams selling out 20,000-seat arenas to championships with 99 million people streaming the events, Marsh said there is no doubt the industry — which brings in close to $1 billion a year — is ready for this type of facility.

"Full-on locker room, streaming booths, video review rooms, office space for the staff," Marsh continued of the amenities. "It will become our world HQ for the Philadelphia Fusion."

The arena, which is scheduled to open in 2020, will also play host to concerts and other events. Construction begins this summer.

"To be down here with the big boys and be in the same lot as our Philadelphia Flyers and the 76ers as well here, it's huge," Marsh enthused.

music
Elton John admits John Lennon was 'physically sick' before their performance together
music
Here's why Eric Church wrote a letter to Johnny Cash's kids before the 2020 ACM Awards
sports
Bronny James cracks top 30 in class of 2023 recruiting list
news
Supermarket selling leaves off the ground as an 'autumn bouquet'
music
Fort Worth making its way to Magnolia TV with new show 'Self Employed'
sports
Nick Foles: It was Frank Reich 'who figured me out as a player'