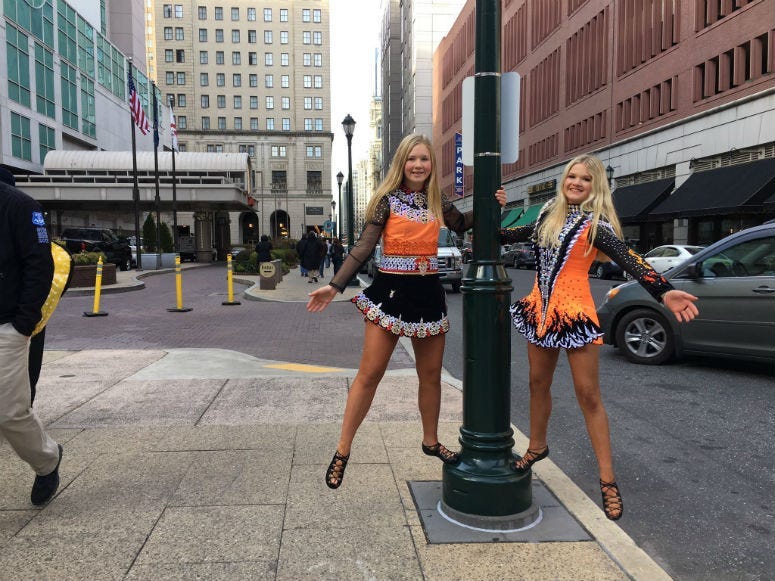 November 29, 2019 11/29/2019 8:24 pm
PHILADELPHIA (KYW Newsradio) — The 50th anniversary of the Mid-Atlantic Oireachtas competition in Philadelphia is in full swing.
Aubrey Luce, 13, and Madison Pennington,12, are moving up in the world of Oireachtas — Irish step dancing — after competing and winning among a pool of hundreds of other dancers.

Claire and Maura Read of Delaware are competing this weekend at the 50th Anniversary Mid-Atlantic Oireachtas Irish Dancing competitions and they showed off just a bit of their major skills!.@KYWNewsradio pic.twitter.com/tjpA9Xi59E

And this year is big.

"They can qualify for worlds or nationals, so it's very important," she said.

The earliest known reference of Irish step dancing in the U.S. occurred in Philadelphia in 1789, and Mid-Atlantic Oireachtas is carrying on that tradition. They do it in Center City every year, just one day after Thanksgiving, with all the glitz and glamour of Hollywood.

"It's what I love, it's my passion and the gift I was given," said Owen Lubber, one of the many male dancers who say dancing in Philadelphia during Thanksgiving weekend is a family tradition.

There are eight categories, and dancers can compete as a team or individually. Competitions run through Sunday.