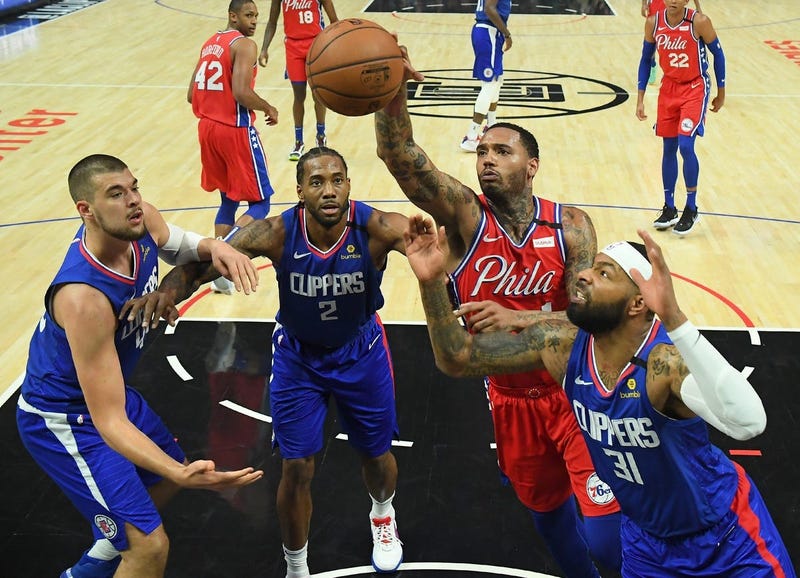 July 7, 2020 07/07/2020 4:23 pm
PHILADELPHIA (KYW Newsradio) — The NBA and the National Basketball Players Association agreed on a list of phrases that players can put on their jerseys in place of their names when the season is scheduled to resume in Orlando. The messages are intended to bring awareness about racial and social injustices.

Mike Scott is always very honest. Monday, on a Zoom call with reporters, he was no different.

He spoke about the anger and disappointment he feels about racial injustice in America, saying he wonders how some people can be so "evil." Scott said he would rather do something than say something.

He seemed skeptical of the campaign's effectiveness and said it's important to vote to change laws with endemic racism.

“I mean, I’m all about just doing instead of just saying and posting or putting something on the back of your jersey. I don’t think that’s gonna stop anything.”

Scott alluded to the list when a reporter asked him how the NBA's restart in Disney World could provide a platform for anti-racist action.

“It was a bad list, bad choice,” Scott said. “They didn’t give players a chance to voice their opinion on it. They just gave us a list to pick from. That was bad. That was terrible.”

He said he was very happy that teammates Tobias Harris and Matisse Thybulle, along with General Manager Elton Brand, peacefully protested in Philadelphia last month. Scott said Harris has shown excellent leadership during this time.

According to ESPN’s "The Undefeated," the list features 29 phrases or words:

Scott’s teammate Josh Richardson said he felt the list came from good intentions. However, he said, “I think it’s tough to try to limit what people are feeling and how people can speak out to just a list of like 15 to 20 sayings.”

#Sixers Josh Richardson felt the list of phrases players are allowed to put on their jerseys in Orlando came from good intentions, but he also thinks it's tough to limit the sayings. Mike Scott was critical of the list earlier today. pic.twitter.com/yrbOPUVlEC

Richardson, like Scott, said there should have been more variety.

“We understand that anything vulgar, our league doesn’t necessarily represent, but for issues and causes such as now, I think that list is an example of a form of limitations. I think we should be able to express our struggle just a little bit more,” Brown said, according to ESPN.

Brown said he hoped more would be added to the list.

When KYW Newsradio reached the NBA and NBPA for comment, neither organization responded.