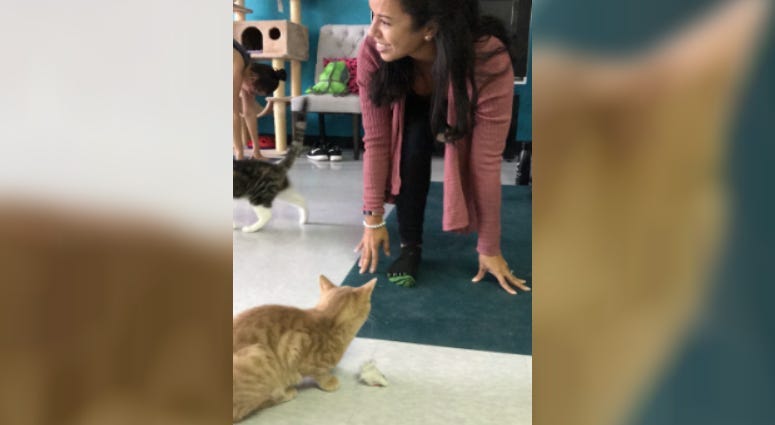 "It was fun, and everyone was able to laugh at themselves when they fell," said participant Hannah Schultz, "or if a cat was falling on them so it was very comfortable."

The proceeds for Sunday's class went to the Animal Coalition of Delaware County, an organization that helps cats, dogs and other pets, according to the cafe's Jeanna Uranko. "Our cats are supplied by ACDC rescue," said Uranko. "100% goes back to the rescue cats, the cat cafe cats."

Yoga instructor Lee-Ann Barber said the class added some new elements to the age-old practice that was good for the cats and people involved. "It kind of brings another level of comfort," she explained. "I think it really allows people to be a little outside of their comfort zone at the same time."

"You could lean down. There were cats crawling underneath you, on top of you," described Schultz. "It was really cool, and it wasn't distracting. You were still able to focus, but still get to see them."

The nonprofit Cat Nook Cafe lets more than a dozen cats looking to be adopted roam around, and maybe even find a new home, during the hour long class. Terri Wright says it was neat to do a downward dog pose, right next to a purring cat.

"I loved it," she declared. "I'm looking to get a cat so it was nice to come in and see what they're like, and what their personalities are like. It was a win-win for me."

Many of the participants who are also cat lovers said taking part in the class, and being able to help animals that need it, is "purr-fect."