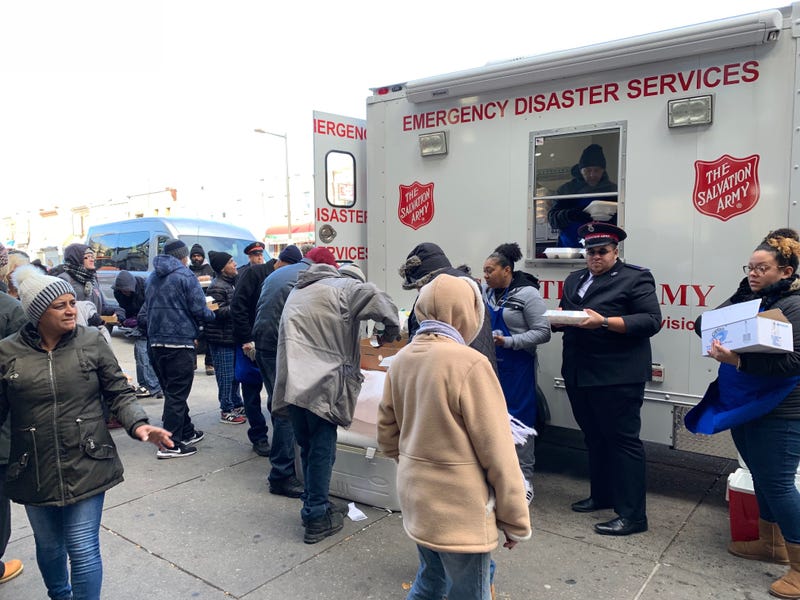 November 28, 2019 11/28/2019 6:13 pm
PHILADELPHIA (KYW Newsradio) — On this Thanksgiving Day, the Salvation Army provided hot meals to some of those who needed them most. They gave out 250 turkey dinners on the streets of Kensington, a neighborhood that has been ravaged by the opioid epidemic.

"We want them to know that a human being cares about them. We look them in the face. We ask their name," Cowen-Zanders said.

She says it's an effort to feed the soul, as well.

"The individuals right now are in a place where they don’t necessarily feel that people care about them. They don't always care about themselves. So it's important for us to say, 'We love you. We care about you.' And again, that you haven't been forgotten."

One man named Marcus, who says he's been using drugs in the streets, said he appreciated the hot meal.

"They're angels, man. They come out here and give grown men food," he said. "They don’t have to do that, you know?"

And he said, on Thanksgiving, he just might be turning a corner with his family.  "They care about me, you know? I’m starting to see what matters in life. There's a lot more to life than being out here, you know what I mean?"

And for that, Marcus said, he's thankful.