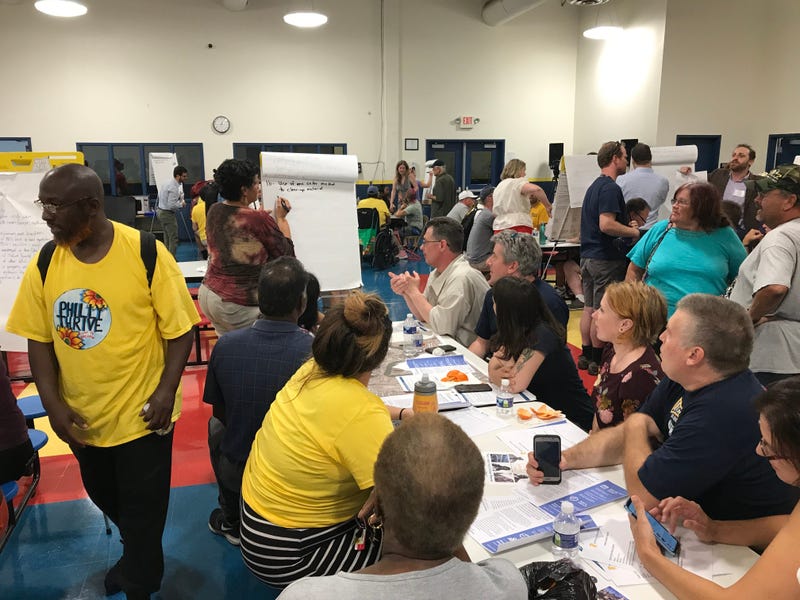 PHILADELPHIA (KYW Newsradio) — The effects of the South Philadelphia refinery explosion and fire in June is still being felt and will be for some time to come. An advisory group is helping some of the people affected most have a say in the future of the site.

The Refinery Advisory Group held its second public meeting on Tuesday, looking for input from dozens of community members. The meeting came just hours after union workers at the refinery were notified that most of them would be let go immediately.

At the meeting, neighbors described how the refinery has affected them, and made suggestions for what should take over its space.

"I made a recommendation to the advisory council, and I talked to them about a method called decision analysis," said Rob Gusky.

Gusky, a degreed petroleum engineer with more than three decades of experience, also happens to lives in South Philadelphia close to the refinery.

He says the decision analysis method, which he has used throughout his career, makes sure key stake holders have their voices heard.

"The way that it works is it really assesses each option that people come up with and try to determine which one is most appropriate," he said.

Gusky says the option he's putting forward is something that could help Philadelphia become a leader in renewable energy.

"I really see it as an opportunity, if we look down the road, if the refinery does completely close," he said. "So what I've been looking at is the opportunity to put what they call a solar farm in that area."

Derek Hixon, who works with Philly Thrive, a campaign to transition the site away from fossil fuels, was on board with the suggestion.

"Don't let the kids go through the same thing," he said. "Find an alternate sorce of fuel. Solar field. I'm all for it. It should be solar or something like that. I'm all for it."

Hixon said he grew up a few blocks away from the refinery. At the meeting, he described how it affected his life.

"There's a lot of cancer in my neighborhood, you know," he said.

No matter what happens at the site, they need to make sure the neighborhood's needs come first, he said.

"If they're going to be there, they need to get more involved with the community."

City officials say they'll use the community feedback to prepare a final report, to have a record of community opinions about the impact of the refinery closing, so that any future decisions are made in context of the people most affected.