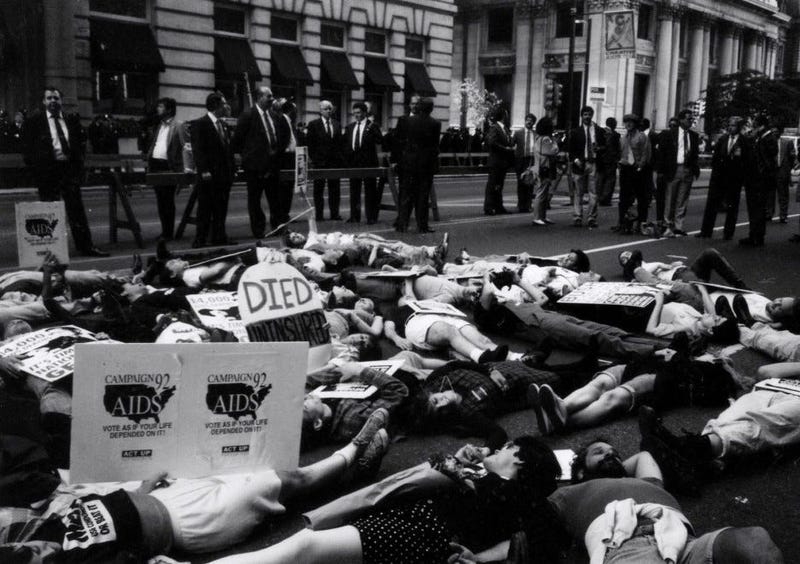 PHILADELPHIA (KYW Newsradio) — The real test of Stonewall came 12 years after the celebrated protests, with a setback so profound it threatened to wipe out, not just the gains of the gay community, but the community itself.

In 1981, gay men in New York and San Francisco began suffering from unusual illnesses and rare infections. Doctors were confounded as the cases multiplied and spread to other cities.

"Nobody knew what that meant, and then all of a sudden it became obvious we were dealing with a problem," recalls Dr. Michael Braffman.

"Stonewall taught us how to organize," he says. "The reaction to the disease would not have been as robust in the absence of the Stonewall riots."

AIDS activism was so successful that the disease, today, is a manageable chronic illness, easier to control in many cases than diabetes, so it's easy to forget how frightening the disease was in the early days, how mysterious and how deadly.

Braffman has not forgotten.

"Every patient I saw was going to die. And did die," he says. "I kept a list of every person I took care of, their name and what they had and when they died. Looking back, the first two or three years, every other week somebody died on average, 24, 25, 26 people that very first year. And you prepared for it. You prepared yourself for it. You prepared them and their families. And the deaths were never pleasant. They were usually drawn out, associated with lots of complications. It was getting harder and harder to watch that happen."

There were also misconceptions about how the disease was spread to contend with, and disdain for victims, seen as either promiscuous or drug abusers.

"I heard some comments that I'd rather not repeat about the people who were contracting HIV," Braffman says. But he adds that changed fairly quickly, as more became known about the disease, as it spread rapidly and affected other populations.

And then there was the movie "Philadelphia," a sympathetic portrait of a gay lawyer, played by Tom Hanks, from a close-knit and loving family, who gets fired when he shows symptoms of AIDS and takes his employer to court as he's dying.

Braffman treated the man who served as a prototype for the role, Clarence Cain, who was fired from Hyatt Legal Services while he was in the hospital recovering from pneumonia.

"He came from a very poor family in the South. His family came up with him," Braffman says. "He was in the last stages of his disease, very emaciated but still coherent, and struggled to the courtroom. As I remember, the verdict was a very paltry sum." It was $157,000. "But it was the beginning of the recognition that patients such as he or any patient with an illness cannot be summarily dismissed from their work, cannot be discriminated against simply because they have an illness."

Fair was troubled by their approach, though. They distributed condoms and did outreach, but only in the bathouses and gay bars. Fair felt the African-American community was underserved.

He worked for the Hospital and Health Care Workers 1199C, a politically powerful union, which also gave him an added perspective on the disease. The union helped elect Philadelphia's first black mayor, Wilson Goode. And as AIDS spread, Fair appealed directly to Goode for the city's help in creating a broad-based approach to fighting the epidemic.

Goode responded by creating the AIDS Activity Co-ordinating Office, putting Fair in charge and giving him $6 million in city money.

"Nobody in the country had city money. They had state money and federal money, even New York and San Francisco. We had unrestricted city money, which meant we could do anything we wanted with it," he says.

Fair brought a sense of urgency to the task and put the money quickly into education, prevention and care.

"There wasn't any medical program to spend it on, because there was just research being done. Nobody had any drugs, so we created case management, home care programs, AIDS housing programs," he says.

With his connections in the African-American gay community, Fair was also able to help bridge a racial divide that had opened among those fighting to contain the disease.

"They referred to Philadelphia as having AIDS war. That's how bad it was," says Rashidah Abdul-Khabeer — then Rashidah Hassan — a nurse treating AIDS patients in the 1980s. She founded a group called Blacks Educating Blacks about Sexual Health Issues, or Bebashi.

Abdul-Khabeer was working with the Health Department and the AIDS Task Force to teach health care workers and families how to care for the patients.

"I said, 'You're willing to bend them over and screw them, but you won't take care of them. You're not coming to their neighborhoods doing education or providing them with support services or dealing with any of the issues that come with the racism that's been institutionalized in this country,'" she recalls. "I said that it was intolerable and unacceptable that black gay men would be subjugated in this epidemic as though they did not exist."

She says the Philadelphia Gay News denounced her as homophobic but her message got through. Bebashi got more volunteers. Today it remains a vital organization.

She and Fair formed an alliance.

"We accepted roles where he could be the bad guy, because he could bang on tables, as he was famous for doing," she says. "And then I could come in and be the voice of reason."

While she and Fair worked together to address the crisis locally, the group ACT-UP exerted pressure nationally to get treatments tested and approved in the face of what they perceived as indifference tinged with homophobia. They were effective. Researchers discovered AZT would treat AIDS, temporarily. Then they developed a cocktail of drugs that worked longer term. Now a single pill a day can control the disease.

Braffman says it's important to educate young health care providers about the early days of the disease, because another epidemic, surely, will come along.

"They need to have an appreciation for how you can just stick in there and care for your patients as best you can," he says. "And also, the recognition that people are people are people and when they are unwell our obligation is — if one has any judgments or pre-judgments, well that goes out the door — you're just there to take care of folks."

Abdul-Khabeer adds that AIDS continues to disproportionately affect people of color. Of the 500 or so new AIDS cases in Philadelphia every year, about 70 percent are African-American and nearly 15 percent are Latinx.

"We still have work to do," she says.