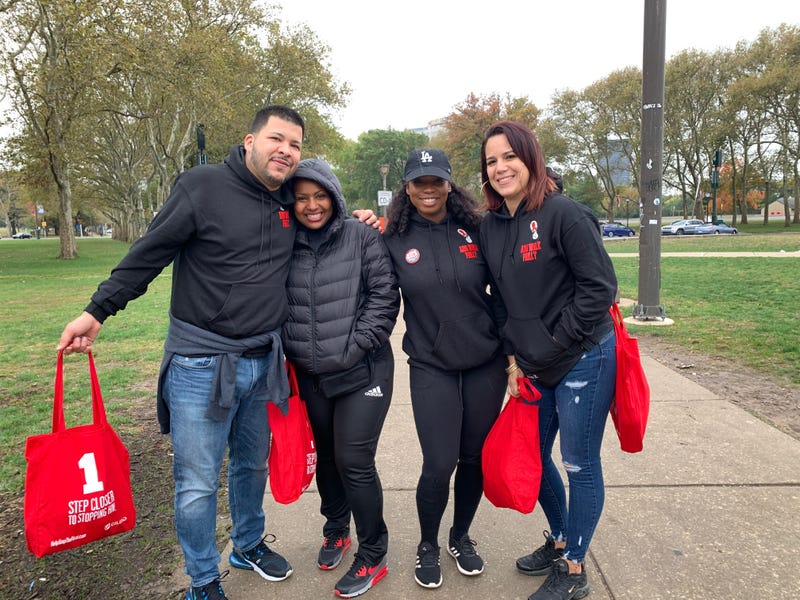 AIDS Fund executive director Robb Reichard said despite the ugly weather and a drop in corporate sponsorship, this year's event outpaced the last.

The number of young people taking part was another reason for Reichard to celebrate.

"We are so excited that there are so many high school and college students that are out here today," he said.

By mid-morning, as the walk was wrapping up, the enthusiasm and commitment of participants like Ciji Carr was not flagging.

"I think we've kind of lost focus on how severe and serious this is," Carr said. "So I think that something like this is something great because it brings more people out, and it brings the conversation back up and it should never go away."

Ciji was part of a team organized by her friend Luis Molina.

"As a gay male, it's impacted my community a lot," said Molina, "and I just feel like we need to bring that awareness up to everybody, and get to zero together."

But with people under 25 accounting for one out of every four newly diagnosed HIV infections, Molina said it's vital to engage and educate them.

"Some people aren't truly prepared for what's out there," he shared. "I feel like we should be doing a lot more to make them aware and educate them, and let them know that either abstinence or protection is the best way to keep yourself safe."

Carissa Watlington's mood was positively sunny after walking up Martin Luther King Drive and back, exclaiming, "I'm happy, I made it!"

It was her first AIDS Walk, dedicated to her brother's memory.

"And we still got others who live with AIDS and HIV," she said, "so hey, listen, it's for them as well. And it's good exercise."

Reichard also noted the need for funding doesn't end when the last walker crosses the finish line, and that donations can be made at the AIDS Walk Philly website.