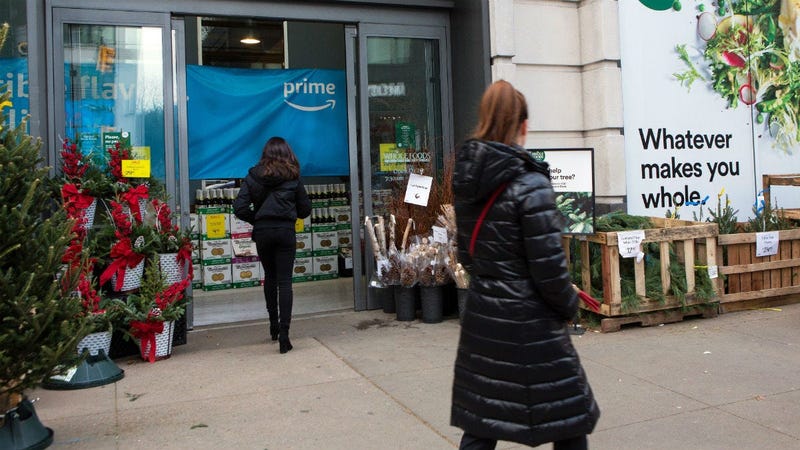 By Nathaniel Meyersohn, CNN Business
(CNN) -- Amazon has trained its Prime members to expect low prices. So naturally those shoppers have been reluctant to dish out for expensive groceries at Whole Foods.

Amazon bought Whole Foods in 2017 for nearly $14 billion to gain entry into the $860 billion US grocery industry. Amazon hoped the deal would help it convert Whole Foods' shoppers into Prime members.

The retailer also set its sights on an even bigger opportunity: Convincing more of its approximately 100 million Prime members in the United States to buy their groceries at Whole Foods.

Amazon has tried to make Whole Foods more attractive to Prime members since the acquisition. Amazon initially cut prices on products like salmon and avocados. Then it began offering an extra discount on sale items exclusively for Prime shoppers last year to sweeten the Whole Foods offer.

Whole Foods' high prices have been a big reason why Prime members have stayed away. Although Amazon made splashy discounting moves at first, Whole Foods' prices have creeped back up in recent months and remain well above rival supermarkets.

Amazon will lower prices again at Whole Foods, a sign that it believes Whole Foods needs to change even more to shake off its "Whole Paycheck" reputation and finally push existing Prime members to shop there.

"Amazon and Whole Foods understand there are still price perception issues that need to be addressed," said Tory Gundelach, analyst at Kantar.

Although Whole Foods helped make natural and organic items popular with a wide swath of Americans, it has become a victim of its own success. Cheap natural foods have gone mainstream, hurting Whole Foods.

Bigger chains like Kroger, Albertsons and Aldi have taken note of Whole Foods' appeal and expanded their own exclusive lines of organic foods. Kroger's Simple Truth grew 15% last year and is now a $2.3 billion brand. Aldi plans to expand its fresh food selection by 40% at its more than 1,800 stores across the country.

Natural and organic foods are "not something that appeals to a specific, high-income group anymore. It's the way the majority of shoppers are eating," Gundelach said. "Those items can't really be sold at much of a premium anymore."

Whole Foods' prices have also been ticking back up as consumer goods' manufacturers such as Dr. Bronner's and Haagen-Dazs increase their costs, according to the Wall Street Journal. The newspaper reported that in February, Whole Foods raised prices from 10 cents to several dollars on hundreds of products.

Morgan Stanley analyst Vincent Sinisi found that Whole Foods' prices for a basket of 60 items have risen for three straight months and were 15% higher than traditional grocery stores in March, including 30% higher in proteins. Prices on the basket were 2.5% higher last month compared with a year ago.

"It is now becoming clear that Amazon has pulled back on incremental price cuts," Sinisi said in a research report on Monday.

But Amazon will again try to lower prices on hundreds of items at Whole Foods and will double the number of weekly deals for Prime members.

The cuts will go into effect Wednesday and are mostly focused on produce. Amazon and Whole Foods said customers will save an average of 20% off discounted items, including greens, tomatoes and fruits. The Wall Street Journal first reported the plans.

Kantar's Gundelach said that grocery stores frequently cut prices on products and the latest round of cuts only applied to a fraction of the approximately 60,000 items at Whole Foods' stores. "This may not have a big impact," she said.

The bigger impact of Whole Foods' latest price cuts could be to put pressure on smaller, regional grocery chains. Small chains are getting squeezed as Walmart, Kroger Costco and others lower their prices to compete with each other, discount German chains Aldi and Lidl, and Amazon.

Southeastern Grocers, the owner of Winn-Dixie and Bi-Lo, and Tops Markets have recently filed for bankruptcy. More could be on the way, analysts predict.