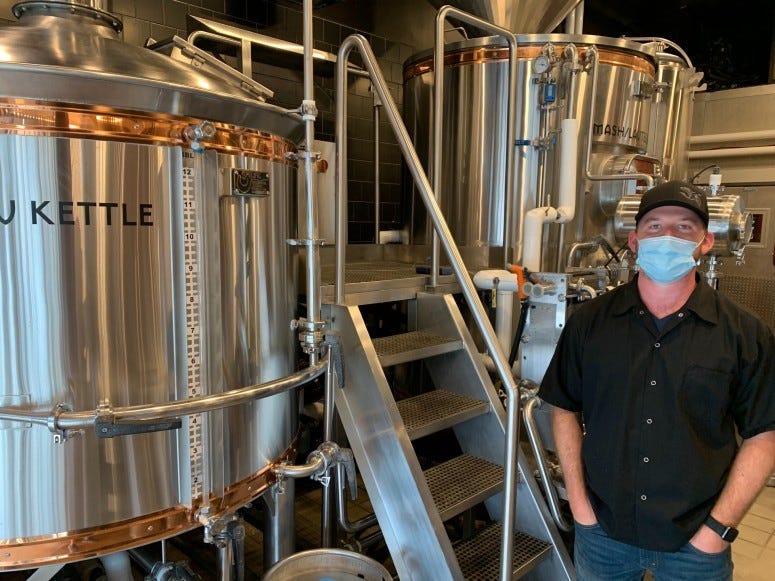 “I take their temperature, ask them to sanitize their hands and then I personally walk them back to the stylists’ chair once they’ve guaranteed that it’s all sanitized. In between I usually do hourly cleans with the bathroom and the ATM and any touchable surfaces like the front desk, doorknobs, light switches, things like that,” the 19-year-old explained.

Her hands are raw by the end of the day from washing them so frequently.

“So the host now will bus the table, expedite the food, they’ll work takeout and curbside, clean the bathrooms. Bartenders will too. They might go back in the kitchen and bring out food. Cooks are now dishwashers and floor cleaners, so everyone is performing multiple roles,” said Eric Roberts, general manager of Iron Hill Brewery’s Huntingdon Valley location.

In the beaten down restaurant business, this intense focus on teamwork is necessary because owners can’t afford the cost of such luxuries as a cleaning service.

Roberts said they’ve also been forced to curtail production of their beer.

“We went from having 16 locations, that’s 16 breweries and 16 brewers, to more or less four operating breweries. So there’s only four breweries actually in production at this moment because of what we can afford to pay them,” he said.

And the company’s crown jewel is sitting dormant.

“Center City, which is one of the highest grossing beer stores in the company, is completely shut down. They haven’t been opened during the entire pandemic. So you’re losing hundreds of thousands of dollars through one store,” he added.

Virtually all work these days is done while wearing a facemask, the ubiquitous symbol of our COVID-19 world.

It’s a most important new tool of the trade for Mike Spadafora Jr., a Richboro dentist who recently took over his father’s business. He’s still getting used to leaving the office every day with marks from those heavy duty N95s.

“You know, red indentations across your cheek and nose and across the back of the head. It goes away and it’s a small price to pay, whatever it takes to be safe. Safety is number one,” he said.

He and his dad now require the entire staff to change into scrubs every morning. They call it “getting gowned up.”

“Anything that we’re producing, aerosols, we wear the N95, everyone’s to wear eye protection. My dad and I both wear dental loupes, magnification. We wear a headlight and then we wear a face shield, gloves. The women wear hair nets,” he said.

Spadafora Sr. said it’s a process and will take time to iron out the kinks.

“And we don’t know how long it’s gonna take to get comfortable. So we may be doing this, and my guess is we’re gonna be doing what we’re doing now for a long period of time until we come up with a vaccine. And who knows how long that’s gonna be?” he said.