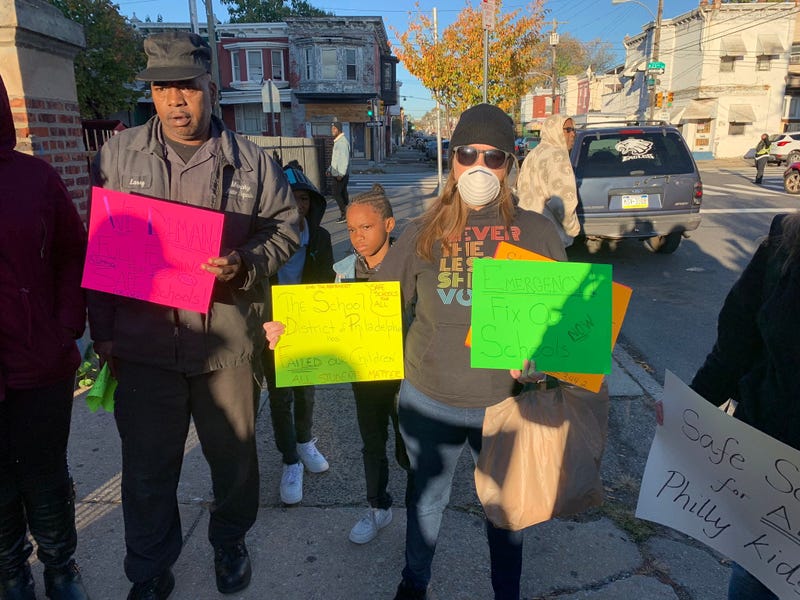 October 28, 2019 10/28/2019 4:44 pm
NORTH PHILADELPHIA (KYW Newsradio) — Parents, teachers and city officials are demanding action after asbestos was discovered in yet another Philadelphia school.

The group staged a rally outside Thomas M. Peirce Elementary School in North Philadelphia Monday morning, where asbestos was discovered flaking off pipes in the school gym.

City Councilmember Cindy Bass, who represents the neighborhood where Peirce is located, said the School District of Philadelphia should close the building and relocate the students and staff — now.

“We have to rise up in this moment and demand that the school district fix the problems here,” she said. “Let me be clear why we’re out here: There is exposed asbestos in the gymnasium where the children are.”

The Philadelphia Federation of Teachers retained an environmental scientist to study conditions in school buildings, and it confirmed on the discovery of asbestos at Peirce.

“Children are children. They play games, they bounce balls and, if indeed a ball hits an area that is not encapsulated, it means that the particles are going to go into the air,” added PFT President Jerry Jordan.

Jordan said state and local lawmakers need to step up and fix the problems.

The PFTs Jordan says Pennsylvania must step up to help.@KYWNewsradio pic.twitter.com/puUqj1x8Oq

“This is about them. This is not about me,” said activist Antoine Little, who has three young children who attend Peirce. “As parents, we need to be outraged. As staff of this school, we need to be outraged. Because at the end of the day, this is not about us. It’s about our children who attend all Philadelphia public schools.”

Activist Antoine Little leads a rally this morning outside T.M. Pierce Elementary School where the Philadelphia Federation of Teachers and parents say asbestos has been found in the gym.@KYWNewsradio pic.twitter.com/rWbqvaHRjN

In a statement, the school district insists there is no asbestos damage in the gymnasium. It did say, however, that it found damage to asbestos insulation in pipes in the school basement, but it completed the abatement process over the weekend.

"The District has worked with the principal to schedule and expedite inspections and will work with the school community to keep them informed. In addition, the District will work with the Philadelphia Federation of Teachers (PFT) to jointly plan for additional inspections," read the statement, in part. "The District also recently announced $500 million in borrowing for Fiscal Year 2020 that will provide for the planned construction of a new Peirce school building."

The rally comes in the wake of a major discovery of asbestos at Ben Franklin High and Science Leadership Academy at the beginning of October, which will be shut down for abatement until January.