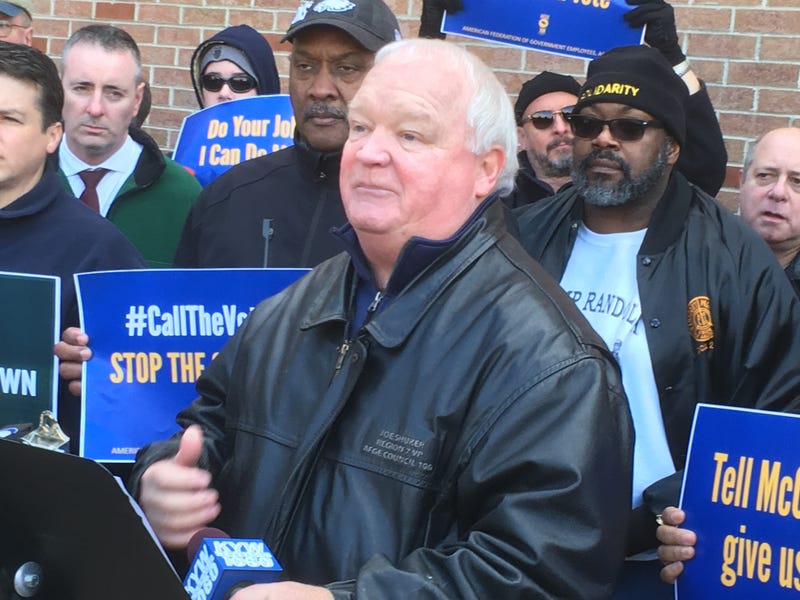 January 25, 2019 01/25/2019 10:18 pm
PHILADELPHIA (KYW Newsradio) — Hours before President Donald Trump announced the reopening of the government — before anyone knew a deal was even in the works — morale issues were front and center among TSA workers, who rallied at Philadelphia International Airport Friday.

On his drive home from the rally, Joe Shuker, head of the TSA union in Philadelphia — Local 333, which represents more than 700 workers — heard the historic shutdown was ending after 35 days.

"I don't know if I ever felt this way before," he said, "totally relieved and totally frightened at the same time."

He cautions it may wind up being a temporary paycheck, since the government is only temporarily reopening for three weeks.

"They're going to have to hold onto what money they have, because it may happen again on Feb. 15," he noted.

Before the news broke, Jennifer Fitzpatrick of Haddon Township, New Jersey, was composed as she held her sign outside Terminal B. But tears streamed down her cheeks as she thought about caring for her two teenagers.

"I have applied for food stamps," she admitted. "I fight every day and struggle with my bills. But it's hard, not getting a paycheck. I'm a single mom."

Throughout the 35-day ordeal, she appreciated the donations and extra help.

"The stuff that I never thought I would have to struggle for. I've been a TSA worker for 11-and-a-half years. That's exactly why I came to a government job," she said, "I thought it would be good, being a single mom."

Phil Glover, vice president of American Federation of Government Employees District 3, which represents federal workers in Pennsylvania and Delaware, said they're "relieved a deal was reached for a temporary solution." But, he said, the union will "keep preparing in case this falls through or Feb. 15 comes and we are again in the same position."

Shuker believes it will take a few days to process the government payroll before the checks are dispersed, sometime next week. He anticipates federal workers will get a straight 80 hours of back pay, and then there will be adjustments for differential, overtime and other pay add-ons.

"That's what they've done in the past. Whether they do it or not this time, that's to be seen," he said.