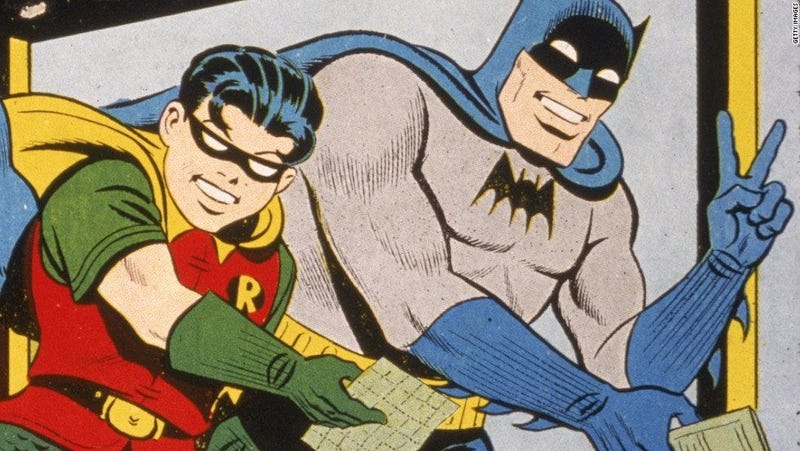 June 24, 2019 06/24/2019 2:11 pm
By Scott Huver, CNN
(CNN) — Three decades after director Tim Burton's 1989 "Batman" film became a box office blockbuster and pop culture phenomenon, the decision to bring the Dark Knight to the big screen seems like it should have been a no-brainer. But in the years leading up to the film's release, it was as hard to breach the barriers to Hollywood as it was to break into the Batcave.

One dedicated superfan refused to give up his crusade to bring the Caped Crusader to cinematic life, and in doing so he helped redefine Batman's perception in the public eye.

"By the time I graduated high school I had over 30,000 comic books that took up my dad's entire garage — he never got his car in the garage," remembers "Batman" producer Michael E. Uslan of his comic book obsessed youth, growing up in the 1960s. "I went to the first Comic-Con ever held in history, the summer of '64 in a fleabag hotel in New York City; I was an early member of comic book fandom as it organized. When I was 11 years old, I met Stan Lee for the first time and it was a life-changing experience."

His passion burned into adulthood as he attended Indiana University, where he pitched the folklore department with a then-unheard-of take on comic book heroes as a pantheon of modern mythology: the Flash was analog to the Greek god Hermes and the Romans' Mercury, and so on.

When a dean who'd read comics as a kid dismissed Uslan's pitch as preposterous, Uslan asked him to recount the story of Moses, then pointed out the undeniable parallels to Superman's well-known origin. "He stops, stares at me for a veritable eternity and then says, 'Your course is accredited,'" says Uslan. "I then became the first college professor of comic books, ever."

With some sly self-promotion, Uslan's popular class became the subject of much media coverage. Suddenly he'd receive supportive phone calls from Stan Lee ("Which I always refer to as my burning bush," he quipped, as well as DC Comics' soon-to-be president Sol Harrison, who flew Uslan into New York and found ways to put his skills to use for the company between semesters — a connection that cemented his connection to his favorite comic book superhero of all, Batman.

"I began to write Batman comics, which was my dream since I was eight years old," Uslan recalls — a wish-fulfillment that panicked him for "ten minutes" until he formulated his next dream, one that had been percolating since 1966 when the much-anticipated "Batman" TV series starring Adam West and Burt Ward debuted, shocking the young Uslan with its campy, tongue-in-cheek take on the hero he knew had dark, gothic roots.

"All I can describe the night to you is I was simultaneously thrilled and horrified by what I was seeing on TV," he remembers. "As a hardcore fanboy who really knew the whole history of Batman, this was not the true Batman. This was not the creature of the night stalking disturbed criminals in the shadows. I realized they were making fun of Batman. It was being done as a comedy, and the world was laughing at Batman."

"That night, I made a vow, like Bruce Wayne once made a vow: 'Somehow, someday I will show the world the true Batman and attempt to eliminate from the collective consciousness of the world culture these new words, 'Pow! Zap! and Wham!'"

By the early '70s, legendary comics writer Dennis O'Neil and revolutionary artist Neal Adams had successfully initiated a return to the moodier, shadowy tone that distinguished co-creator Bob Kane and Bill Finger's earliest Batman stories, a move that fans and fellow creators embraced as a means of washing away the bad taste left among the faithful by the TV series, which had been hugely, but only briefly, all-pervasive in its popularity.

Uslan, who by then had secured a job in the film industry, went to DC's Harrison with a new pitch: "I want to buy the rights to Batman, and I want to make a dark and serious Batman movie and show the world the true Batman." Harrison urged him to reconsider. "'The brand is as dead as a dodo,'" Uslan remembers being told, "He said to me, 'Michael, nobody's interested in Batman anymore.'"

But Uslan soldiered forward, teaming in 1979 with the esteemed former MGM exec Benjamin Melnicker to purchase and peddle the film and television rights.

"I was turned down by every studio and every mini-major," says Uslan. "They told me basically it was the worst idea they ever heard, that I was crazy. You can't do serious comic book movies. You can't do dark superheroes. You can't make a movie out of an old television series. It's never been done."

Writer-artist Frank Miller's 1985 landmark Batman miniseries "The Dark Knight Returns" provided a boost to Uslan's argument that the hero could thrive in the darkest, grittiest and most psychologically complex of storylines, to widespread, mainstream attention.

"What it did was it convinced both Hollywood and the general public that comic books were maturing and growing up and were no longer just for little kids," says Uslan. "That change in perception was critically important to this movie getting up, and then an atmosphere of acceptance for it."

It was Burton who cracked the code.

"He had the vision," says Uslan. "He knew how to do the world's first revolutionary, dark, serious comic book superhero movie. He said to me, 'This movie, if we're going to do it this way and not get unintentional laughs from the audience, is not about Batman. It's got to be about Bruce Wayne. We have to show a Bruce Wayne so obsessed and driven to the point of being psychotic that audiences will go, oh yeah, that's a guy who would get dressed up as a bat and go out and do that.' It was critical to the whole suspension of disbelief."

"Then he said 'Gotham City has to be the third most important character of this movie," Uslan adds "From the opening frames of the movie, we have to convince audiences that Gotham City is real, because that's the only way they'll accept a guy like Batman and the Joker seriously.' He was absolutely right about it."

Somehow, it all coalesced, and, as the character turned 50 years old, a blockbuster franchise was born — one that would boost comic sales, launch a toy and merchandising dynasty, spawn further film and TV iterations as well as a fresh superheroic cinema genre and, perhaps most importantly, reimagine Batman as the dark avenger of the night he was always meant to be (fond memories of Adam West notwithstanding).

"My belief was always 'Let's just find great filmmakers who love this character, have an understanding and knowledge of it, have a vision for it,'" says Uslan, whose name continues to grace the credits of every subsequent Batman television and film production. "With Batman in particular, it's about story, story, story and character, character, character. It's not about blowing stuff up and showing off special effects. It's about his humanity...It's important to always respect the character, who's now celebrating his 80th Anniversary.