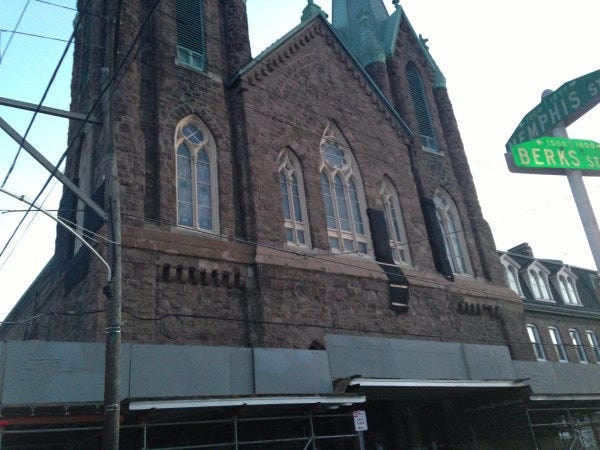 February 26, 2019 02/26/2019 8:55 pm
PHILADELPHIA (KYW Newsradio) — A Philadelphia City Council committee Tuesday advanced a bill that may finally end the 2 1/2 year fight over a Catholic church in Fishtown that is falling apart. If the full council approves the bill, next week, the church would be converted to apartments.

St. Laurentius Parish, built in 1882, was the city's oldest Polish church until the Archdiocese deconsecrated it in 2014 and sold it to developers.

Their plan for apartments was approved in 2016, but a group of former parishioners sued to keep it a church. They kept losing, but it slowed down the process as the building became less and less stable.

When stones fell off the church in January, council president Darrell Clarke did something neighbors normally don't like: Spot zoning for the small parcel so development could proceed. In this case, neighbors applauded.

They testified in support at the hearing, including St. Laurentius Catholic School fifth-grader Trucker Vanstone.

"This bill will allow St. Laurentius church to be rezoned, so that we can do what's best and safest for me and my classmates, the parish and our neighbors," Vanstone said.

The opponents didn't show up.

A spokesperson said they did not appear because they have been subject to abuse and harassment by residents of Fishtown, where the church is located. Carolyn Bechta-Devine says Faithful Laurentians wanted a community center for the neighborhood.

“We believe this church deserves more than 23 apartments,” she said in an email.

"We're so happy to have the backing of City Council in moving this project forward and hopefully will be able to preserve the church for future generations," Voloshin said.

Voloshin says he's waiting for a final report from the structural engineer on how much of the church can be saved.