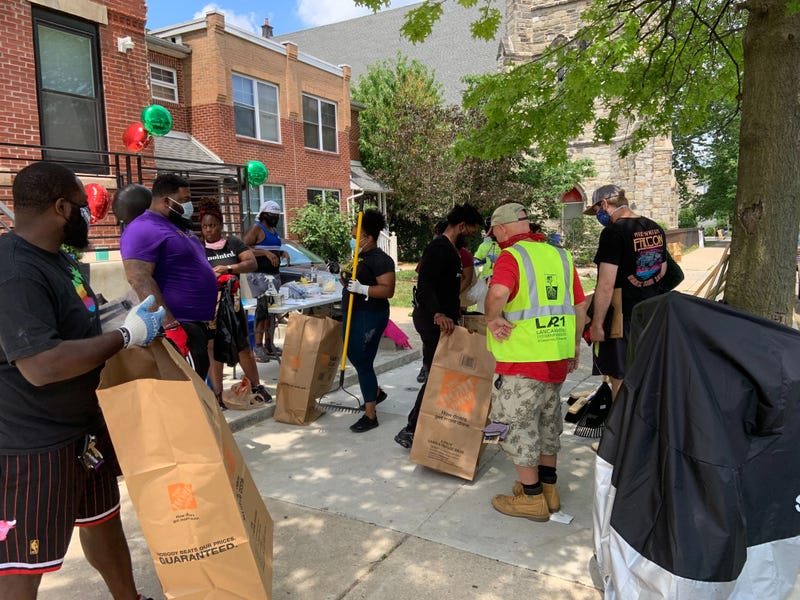 June 20, 2020 06/20/2020 8:42 pm
PHILADELPHIA (KYW Newsradio) — A group of residents of a racially diverse West Philadelphia neighborhood spent their Saturday afternoon taking pride in where they live by coming together to clean up the streets.

The residents and their friends gathered at 40th and Brown Streets in the Belmont neighborhood to get assignments. They started with a prayer, then grabbed brooms, rakes and trash bags, and hit the streets.

Brianna Weeks organized the cleanup effort and was pleased with the support and attention.

"It just kind of grew legs. I wasn't even expecting KYW to be here today either," she said. "I'm just grateful for the turnout."

Weeks added, "We are going to try and do a 1-mile radius, so those areas we just want to touch and give them a little love, that little bit of brotherly love that we so desperately need right now.”

One of the cleanup zones was near 40th Street and Lancaster Avenue, where several businesses were looted and damaged during the unrest.

Among those beautifying the area was Scott Maits of the Lancaster Avenue Business Association.

"We're very concerned about the business corridor about the conditions in the neighborhood. It’s important to have positive conditions so that people will come and shop, so stores won’t go away."

Another neighbor, Christopher, was there picking up trash along the street. He talked about Black Lives Matter and said all supporters can make a difference.

"Anyone out there who wants to see a positive change for all, you know, come out, support, unite and organize," he appealed.

Christopher said his day was made when an elderly lady waiting for the bus thanked him for picking up the trash.

Neighbor Kathy Jordan was out helping as well. She said it was good for all of them to take the time to pitch in.

"We all live here," she said. "I live here, everyone here lives in neighborhood. We care about the neighborhood, so if it's a younger group or an older group, it doesn't matter. I'm 66 and I'm out here doing what I do. It makes a difference."