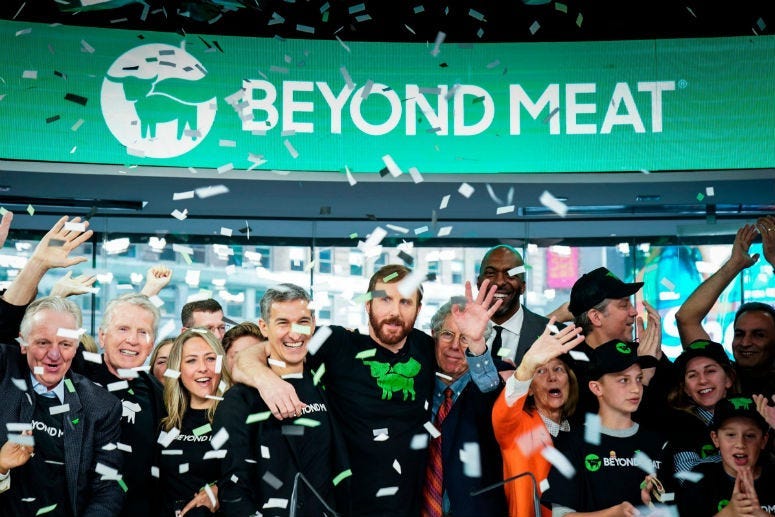 Last week, the company said it would price its shares between $19 and $21. The increase shows just how hot demand for plant-based protein is right now, as more consumers are turning to meat alternatives to keep healthier diets and reduce their impact on the environment.

"We've been overwhelmed with interest from some of the highest quality institutions in the world," Beyond Meat CEO Ethan Brown told CNN Business on Thursday, adding that the increase will help the stock's performance in the long term.

"It really is a time of unlimited growth." Brown said.

Impossible Foods, Beyond's main competitor, has struggled to keep up with increased demand for its product. Earlier this week, Impossible said it was experiencing a shortage because of increased interest.

The acknowledgment came just after the company expanded its partnership with Burger King, which is planning a national rollout of the Impossible Whopper this year. The plan would essentially double the amount of restaurants Impossible works with. Burger King had about 7,300 locations nationwide at the close of last year. Right now, Impossible supplies its product to about 7,000 restaurants.

Plus, Impossible CFO David Lee told CNN Business, demand for Impossible products within those 7,000 locations has more than doubled recently.

Beyond said it's already endured those types of growing pains.

"We went through such difficulties in '17 and '18 as the consumer moved so quickly into this category and into our product," he said. "That caught us off guard."

The company spent the past two years "redeveloping" its supply chain to make sure it could deal with growth. "Today, as the sector becomes even more and more attractive, we're ready," Brown said. "That was not the case two years ago."

In a recent SEC filing outlining its plan to go public, Beyond Meat reported that its net revenue has grown from $16.2 million in 2016 to $87.9 million last year. Today, customers can buy Beyond Meat protein in stores, or eat items made with Beyond Meat proteins at some fast food chains, such as Carl's Jr.

Beyond Meat also lost $29.9 million last year, which it attributed to investments in "innovation and growth of our business." The company added that it expects to continue investing in innovation, supply chain capabilities, manufacturing and marketing.