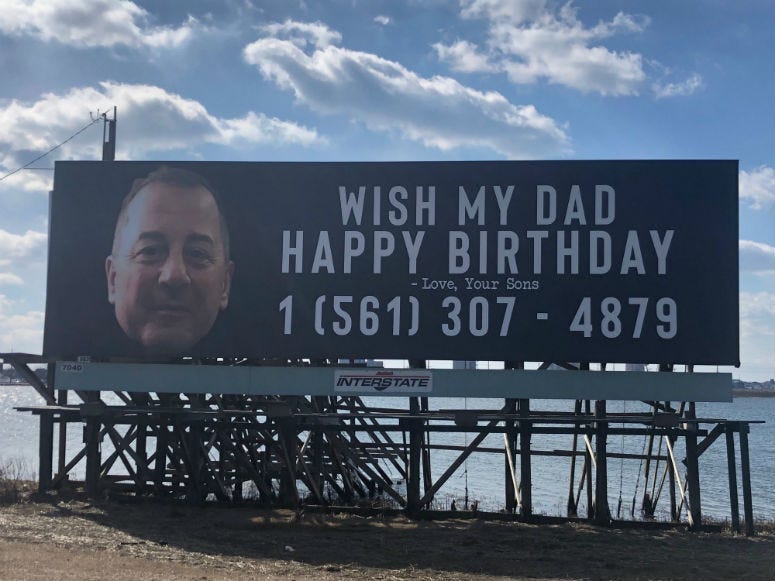 He replied with "who is this?"

Here's how he said the conversation went after that:

"Nick.""Nick who?""You don't know me.""Well how did you get my number, how did you know my birthday was coming up?""I saw it on a billboard."

After that last text from Nick, Ferry knew something was up, and quickly suspected his sons were responsible for this.

Ferry's two sons, who live in Florida, wanted to do something special for their dad's 62nd birthday, which is on March 16.

So they bought a billboard along the Black Horse Pike in Atlantic City. On the left side is Ferry's picture. Next to that, it says "Wish My Dad Happy Birthday" with the words "Love, Your Sons" under it in smaller letters.

And under that, in large font that you can't miss, is Ferry's actual phone number.

His hunch was correct. But when that thought came to mind initially, there's no way he could have realized just how many people would actually respond to this billboard.

"I'm probably up to about 10,000 calls, voicemails and texts," he said, now that the billboard has been up for several days.

At first, Ferry tried to reply to each one, but as word of this unique birthday present spread, and people were reaching out more and more frequently, he just couldn't keep up anymore.

"I really haven't been able to use my phone in a normal way," he told KYW Newsradio. "There's a call coming through right now, it's happened like three times since I've been on the phone with you."

These calls and texts have come from all over the country, some even from overseas. A lot of them are a quick "happy birthday," but other people are looking for an actual conversation.

"They get me on the phone, they want to talk to me, they want to tell me about their most memorable birthday," he said. "People say, 'I lost my dad last year.' I had one guy tell me 'I tried to call my father to tell him about the billboard and he didn't pick up, so I figured I would call you to talk to you and now you're not picking up.'"

Ferry had to change his voicemail, since he stopped answering many of these calls. His new message begins with, "thank you for calling to wish me a happy birthday, I really, very much appreciate it..."

This all may sound like a cruel prank, but Ferry's son, Christopher Ferry Jr., assured KYW Newsradio this was done out of love.

"We wanted it to be a birthday for him to remember," he said. "Yeah, there was a little piece of me that was scared at first, putting his phone number out there, but we thought to ourselves 'go big or go home.''

So practical jokes are nothing new to this family, but this latest one may very well take the cake, if you will.

"It's been really good-natured fun, although at my expense," said Ferry - aka "billboard dad" as he says people are now calling him.

No surprise, "billboard dad" admitted this is his most memorable birthday present ever.

The younger Ferry said the only way he and his brother could ever top this in the future, would be to get him a larger billboard.