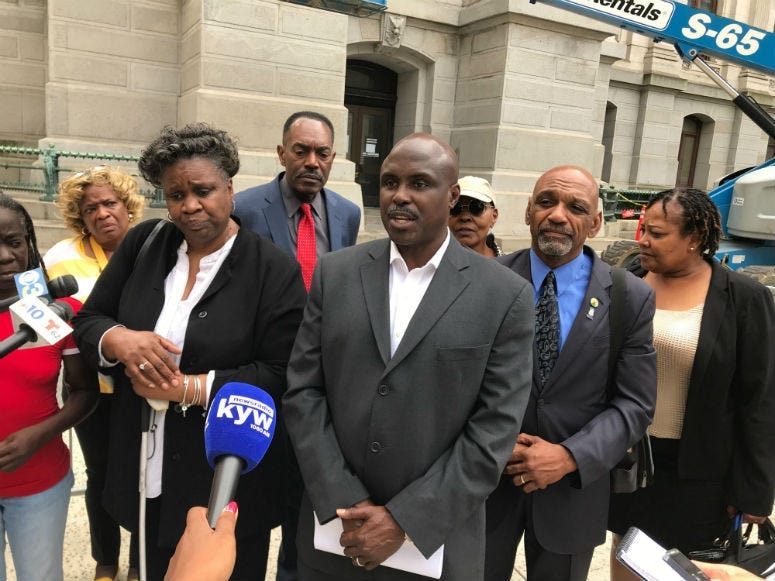 PHILADELPHIA (KYW Newsradio) — A coalition of black clergy and activist leaders met with Mayor Jim Kenney and Philadelphia police at City Hall on Monday to turn up the pressure months after hundreds of Philadelphia cops were linked to racist Facebook posts. The coalition claims more officers will be fired.

"There were more people involved in that Facebook scandal after the internal investigation than was originally reported," said Solomon Jones, a member of the Rally for Justice Coalition.

The Coalition includes the Philadelphia NAACP, POWER, Guardian Civic League and other African-American organizations that led protests in the wake of an investigative report that revealed more than 1,200 racist, homophobic or otherwise problematic Facebook posts linked to more than 300 Philadelphia police officers.

After that event, the group met with the mayor and former Police Commissioner Richard Ross.

On Monday, the Coalition followed up with Kenney and interim police Commissioner Christine Coulter to discuss next steps for the 72 officers disciplined because of the posts.

"There are more officers that are going to be fired than the 13 that were originally named, and while we are pleased with that result, it's not enough," Jones said.

The city has yet to confirm additional discipline is coming, but the mayor's office Monday released the timeline for the search for a new commissioner.

According to the statement, the effort will include a diverse group of people who will look internally and externally for the right candidate and seek public input via survey.

The Coalition says they want more.

"We want a community seat at the table. That has not changed," Jones said.

He said they'll be testifying at a City Hall hearing on the matter later Tuesday.

There is no word yet from Philadelphia police.

The hearing was called by Councilmember Derek Green and the Committee of the Whole and will take place at 1 p.m. in Room 400 of Philadelphia City Hall.