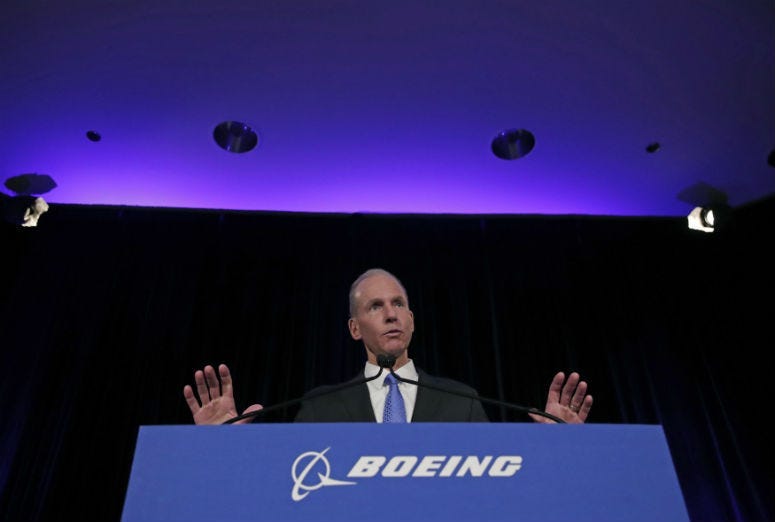 By Chris Isidore, CNN Business
(CNN) -- The Boeing 737 Max crisis has become a "defining moment" for the company, according to CEO Dennis Muilenburg. But he's confident it hasn't hurt Boeing's long-term growth prospects.

Speaking at a New York analyst conference hosted by AB Bernstein Wednesday, Muilenburg said the company is laser-focused on getting the 737 Max back in the air, although he wouldn't give a timeline for when he thought that could happen. He also didn't comment on the overall cost to the company, but said he is convinced the plane will be safe once it returns to service.

"Public confidence has been hurt, and we have work to do to earn and re-earn the trust of the flying public," he said. "We're going to do everything we can to make sure... the Max is safe to fly."

The 737 Max was grounded worldwide after a fatal crash of an Ethiopian Airlines jet in March, which followed a fatal crash of a Lion Air jet in Indonesia in October. Crash investigators have focused on an automatic safety feature on the jet as a possible contributor to the crashes.

Muilenburg said Boeing will work with airlines on different forms of compensation for the grounding and the halt in new deliveries. He said some of that compensation could be in supplying services or future purchases at reduced cost.

"There are a number of different ways we can address this issue," he said. "In some cases cash may be part of the solution."

The US Federal Aviation Administration is currently reviewing a software fix Boeing has completed for the aircraft. Muilenburg said he hopes that aviation authorities around the world will follow the FAA's lead, once it certifies the plane is safe to fly. But he said he understood that some aviation regulators in other countries may keep the plane grounded.

Both Boeing and the FAA have come under intense scrutiny over the certification process for the 737 Max since the March crash. Muilenburg maintained Wednesday the certification was done properly. He said he is confident the FAA's process, which allows manufactures such as Boeing to self-certify parts of new aircrafts, is the best system. But he said Boeing is open to any changes in that process suggested by the various ongoing reviews.

He also said Boeing has had a "seat at the table" in the ongoing trade negotiations between the United States and China. Boeing is by far the largest single US exporter and China is a key growth market for its products, but he said he's confident that Boeing will not be caught up in the trade war.

"Clearly there are challenges right now getting to the finish line on a deal," Muilenburg said. "We also see in both countries a real desire for a trade solution."

The CEO on Wednesday also appeared on CBS Evening News, where he publicly apologized to the victims of the 737 Max crashes. Muilenburg also said he had no plans to resign.

"It's important that I continue to lead the company and the fact that lives depend on the work we do, whether it's people flying on our commercial airplanes or military men and women around the world who use our defense products, that is a worthy mission," he said.