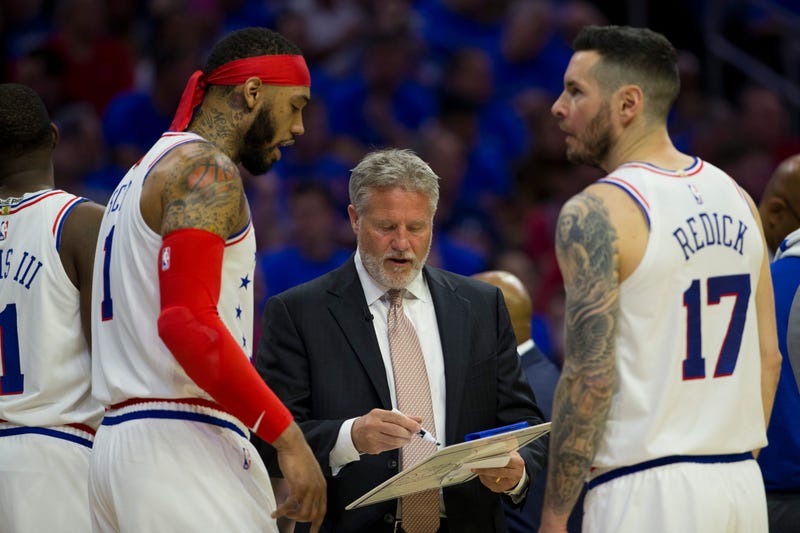 PHILADELPHIA (WIP Sportsradio) — Despite some recent speculation that he may be fired, Sixers head coach Brett Brown will be back for another season, according to an ESPN report.

Brown and the Sixers were recently eliminated from the NBA playoffs on a last-second shot by Kawhi Leonard and the Toronto Raptors.

ESPN's Adrian Wojnarowski reported Monday night that Brown was informed he would be back during a recent meeting with ownership:

There had been some uncertainty about Brown returning for his seventh season, but Harris eliminated that doubt in a lengthy meeting with Brown and general manager Elton Brand on Monday that mostly centered on discussions about the franchise's plans for the offseason. Brown has largely remained a popular figure in the Philadelphia sporting landscape and within the Sixers organization.
Brand and Harris confirmed the news during a Tuesday morning presser.

Brown is currently under contract through the 2020-2021 season, the result of an extension he signed last off-season.

No coach in Philadelphia has been on the job longer than Brown has, who was hired by the Sixers prior to the 2013 season and has been here for six seasons.

Although he holds a 178-314 record as head coach of the Sixers, a large portion of those losses came during "The Process" era, when Brown's job was to develop talent, not win games. Over the last two seasons, the Sixers are 103-61 under Brown, making the playoffs both seasons and advancing to at least the second round.

With it now decided that Brown will be back, the Sixers can focus on the many off-season questions ahead of them, including what to do with key free agents such as Jimmy Butler, Tobias Harris and JJ Redick.