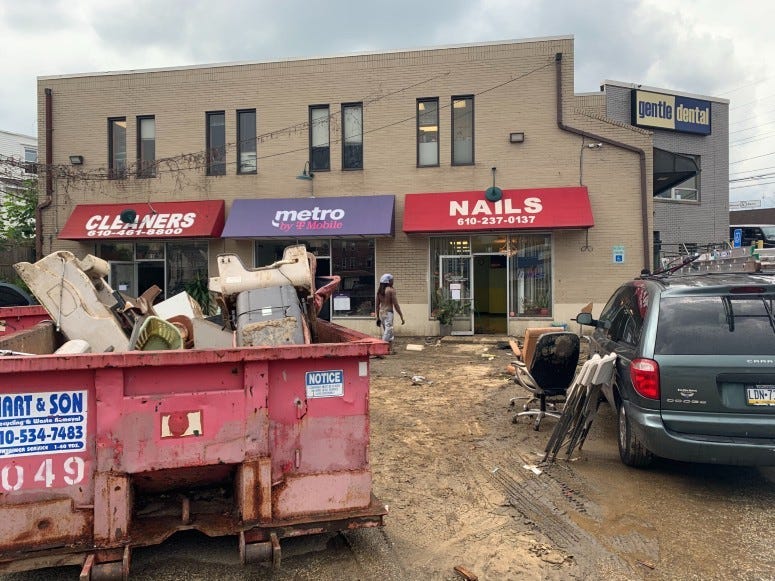 DARBY, Pa. (KYW Newsradio) — In Delaware County, many businesses are still trying to recover from last week's storms and working to get back on their feet as they prepare for more changes in the weather.

It's been all hands on deck at the Best Quality Tire Shop in Darby that was flooded by the Darby Creek last week.

Store co-owner and manager Vanessa Mora said her shop, which was covered nearly to its roof in water, is now condemned, but they're trying to get it back on working order.

“From 5 a.m. till about 9 everyday working nonstop. It's been hard,” she said.

Mora said the township and the utility companies have been helpful as they try to get back up to code, which is pushing her business to the limit.

“We're looking at between $100,000 and $200,000 on the building itself just for construction and refinishing everything in here, but just the equipment is about $8,000. We're not going to be able to get half of that back,” she explained.

She hopes that this week's storms leave her business alone.

“If it does come down the way it did before, at least it's empty in here, and we won't lose anything money wise at least on the machines,” she added.

Mora said there is always some good with the bad — the flooding at her store is giving her an opportunity to make some upgrades.

Susan Chang Oh's dry cleaning company Bright Cleaning in Darby is already having a tough year with COVID-19 — which brought her revenue down 70% — and last week’s flood worsened things.

“Bright cleaners is all totally broken down by this flood, heavy rain,” Oh said.

And her insurance has been no help as they don’t cover the flood, so it will cost her about $100,000 to restore everything.

Oh said while the future of her business hangs in the air, that's not where her concern is.

“Most important thing is my customer's clothing is all wet,” she said.

Those displaced as a result of the floods have been receiving help from the Red Cross.

“We have provided more than 2,200 overnight shelter stays for hundreds of people mostly from Philadelphia and Delaware counties,” explained the organization’s Sophie Kluthe.

Kluthe said in addition to providing thousands of meals, they're also getting people cleaning kits to help them get their homes back to normal.

“People don't realize when people get flooded out it's not just water, it's contaminated water, mud and debris. It really gets into everything, so people who are able to get back into their homes, we want to help them clean it disinfect it to help make that process safer,” she added.

She said the pandemic has stopped them from putting as many boots on the ground as usual, but they’re still doing the same work online.