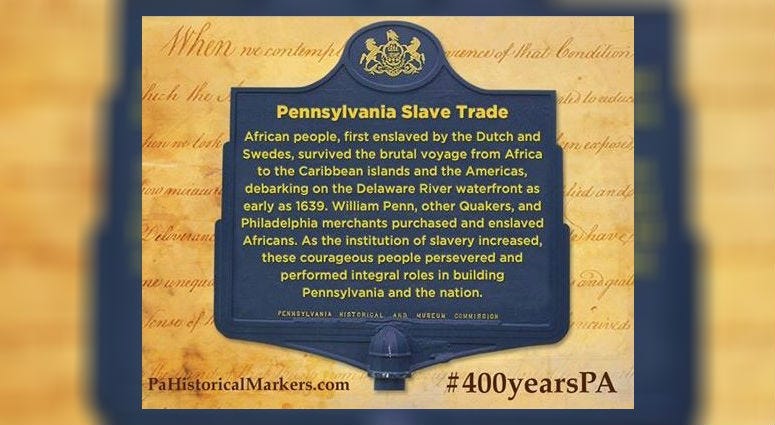 August 21, 2019 08/21/2019 12:54 am
PHILADELPHIA (KYW Newsradio) — This month marks the 400th anniversary of the first arrival of enslaved Africans in America, and the Pennsylvania Historical & Museum Commission is marking the occasion with a six-month campaign.

The first enslaved Africans are documented to have been brought to the English colonies in August 1619. They arrived in Point Comfort, Virginia.

It is believed that the Delaware Valley saw their first enslaved people as early as that same year, making the start of the Pennsylvania Slave Trade, which is reflected in a historical marker on Penn's Landing.

"We'll be featuring at least once a week, African American contributions from a variety of topics," said Andrea Lowery, executive director of the Pennsylvania Historical & Museum Commission.

On Tuesday, the agency kicked off #400YearsPa, a social media campaign designed to highlight some of the 200 historical markers in 35 counties across the Commonwealth that details the many contribution of African Americans both enslaved and free.

"We are really eager to broaden the history that is told here and to tell a really more diverse story to enrich the fabric of what we know Pennsylvania to be."

Every Tuesday, the agency will use the hashtag to share details of historical markers that highlight the contributions of African Americans to Pennsylvania in the area of civil rights, business, education, sports and more.

Pennsylvanians are invited to use the hashtag #400YearsPa to include their own stories about African Americans in civil rights, business, sports, arts and more on Instagram, Facebook, Twitter and other platforms.

Pennsylvania state Sen. Vincent Hughes says #400YearsPa is part of the national 400 Years of African American History Commission's effort to start a conversation about the history of slavery and the contribution of enslaved people in this country.

"To make sure that we fully recognize the black presence in this country."