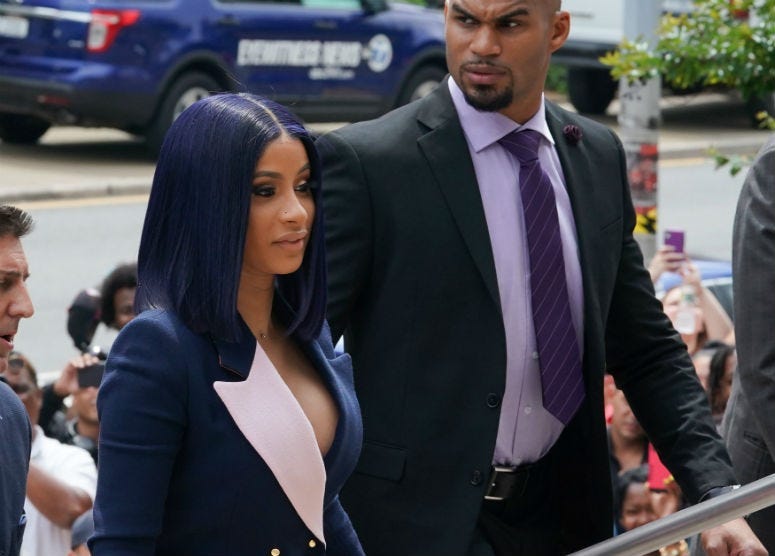 The Grammy-winning rapper and two co-defendants were arraigned Tuesday on charges of assault, harassment, conspiracy and second-degree reckless endangerment in a 12-count indictment, according to the office of Acting Queens District Attorney John M. Ryan.

"The defendants in this case are accused of two premeditated attacks on two women working at a club in Queens last summer," Ryan said in a statement. "The victims allegedly had glass bottles hurled at them, alcoholic drinks thrown in their faces and one woman's head was slammed into the bar. This kind of violence won't be tolerated in our community. The defendants will be held accountable for their alleged actions."

CNN has contacted representatives for Cardi B for additional comment.

Cardi was arrested in October for allegedly participating in the fight. The two bartenders claim they were injured by bottles and chairs thrown inside the club.

She had been charged with two misdemeanor counts of reckless endangerment and one misdemeanor count of assault. But in April, the rapper, whose real name is Belcalis Marlenis Almánzar, rejected a plea deal, which would have granted her a conditional discharge in return for pleading guilty to a single misdemeanor.

Prosecutors then investigated further and took the case to a grand jury.

Cardi's attorney has said he's not aware of any evidence that she caused anyone harm.

Meanwhile, Cardi has been telling supporters she's not going to do time. She appeared at a pre-BET Awards show concert in Los Angeles over the weekend, where she assured the audience, "I ain't going to jail!"

If convicted, she faces up to four years in prison.