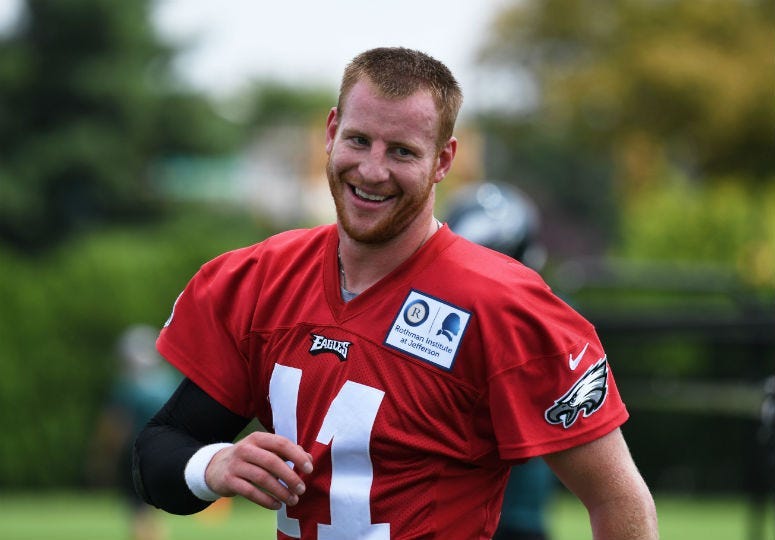 Wentz did not completely deny the story, but he did defend himself.

"I'll be straight up," Wentz told NBC Sports Philadelphia. "It hasn't been the easiest last year for me on the physical level, just battling the injuries, but then just personally going through it, sitting on the sideline and then playing and then sitting on the sideline again. So I realize like I maybe wasn't the greatest teammate at times because I was emotionally kind of all over the place. To the outside world, I probably didn't show it much. But internally, I mean, you're definitely fighting some sort of emotions. So there's things to learn just about how to handle myself in certain situations."

RELATED: Wentz's teammates stick up for him after 'selfish' report

Zach Berman, one of the reporters Wentz spoke to, joined Angelo Cataldi and the 94WIP Morning Show on Monday to discuss the interview.

"I actually found him to be very honest, revealing, more vulnerable than I anticipated — which you can say is a credit to him there," Berman said. "His message was this has been a really difficult year for him, not just physically, but emotionally, and that affected him in ways that he probably couldn't have imagined. It affected him as a teammate, it affected him as a person. I think that message was, moving forward, there's things he can learn from this past year. That he's not perfect."

Wentz did acknowledge at times he can be selfish, saying, "It’s never fun to read, but to an extent, you look at it and be like, ‘Well, if someone did have this perception of me, why? What have I done wrong? What can I get better at?’ I realize I have my shortcomings."

"I think he's referring how he kind of allocated his time and his approach," explained Berman. "He was really, honestly, I guess you can use the word driven to recover from the injury. And during last off-season especially, his focus was on getting healthy, and there might have been things that he overlooked as a teammate just because of his focus on his health. That's really how I interpreted it."

I spoke with Ray Didinger this morning about:-His main takeaways from Super Bowl LIII-Jared Goff coming up small against the Patriots-Why we should appreciate what New England accomplished-Carson Wentz's first public comments on the PhillyVoice... https://t.co/SdayquRVlV

Wentz denied rumors that he did not run plays to Nick Foles, as well as rumors that he bullied offensive coordinator Mike Groh. Wentz also acknowledged that he and Foles have different personalities, on and off of the field.

The question now becomes, will Wentz learn from all of this and change his behavior?

"The year he's had will change it, more than that story," Berman said. "He didn't want to focus on that story specifically, but it is really the first time in three years where he's dealt with that level of criticism and really that level of personal criticism. The fact that he's getting these types of questions is new for him. I do think that the accumulation of what has happened the past two years ... will affect him more than the story itself."