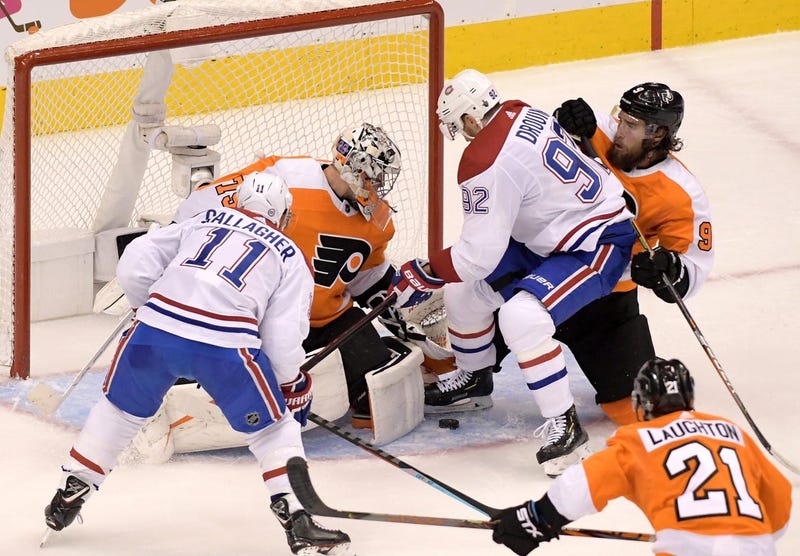 According to NHL Stats & Information, the Flyer became just the seventh goaltender in league history to win his first three postseason games before the age of 22. Hart stopped 27 shots to help his team hold off the pesky Montreal Canadiens 2-1 in Game 1 of their best-of-seven first-round playoff series.

Sixteen of Hart’s saves came in the second period, when Montreal out-played the Flyers. Then, late in the third, Hart had a couple of huge stops against Brendan Gallagher.

“I mean he’s just a true pro,” Flyers center Sean Couturier said of Hart. “Ever since he got in, he does a lot of little things right. On and off the ice he prepares himself like a true pro.”

Couturier and other top Flyers forwards like Claude Giroux, Kevin Hayes, Travis Konecny and James van Riemsdyk remained without a goal since the season resumed. But, Jake Voracek was able to end his drought by deflecting in an Ivan Provorov shot from the point on the power play in the first period.

Sixteen seconds after Montreal tied the score in the second on their own man advantage, 20-year-old Joel Farabee put the Flyers back in a front with impressive persistence to get one by Canadiens star goalie Carey Price.

Price is Hart’s boyhood idol. The two had a moment during pregame warm-ups where it appeared Hart said something to Price.

The young goalie was not fazed by Price. He pointed out before the series started that the Flyers aren’t playing against one player; they’re taking on the entire Montreal Canadiens.

He lived up to that mindset.

“He’s been through big games before,” Head Coach Alain Vigneault said. “He’s played well. He’s just going out there and doing what he’s supposed to do—giving us a chance to win games.”

The Flyers are winners of 13 out of 14, dating back to before the season shutdown. In their history, they’re 23-9 in series in which they’ve won Game 1. The franchise is looking to win its first series since 2012, and having Hart on their side gives them a very good chance to make that happen.

Parent was between the pipes during the Flyers' only Stanley Cup Championship seasons, in 1973-74 and 1974-75. In May, Parent told KYW Newsradio that the Flyers are going to win a Stanley Cup with Hart.

Wednesday night was a good start. One win down, 15 more to go.

“It was a good battle between both teams,” Hart said after the victory, “and whenever it’s a good battle on the ice, it always feels rewarding at the end.”

Guess who also has a birthday today — Flyers legend Bobby Clarke. If that isn’t a good sign, I don’t what is.