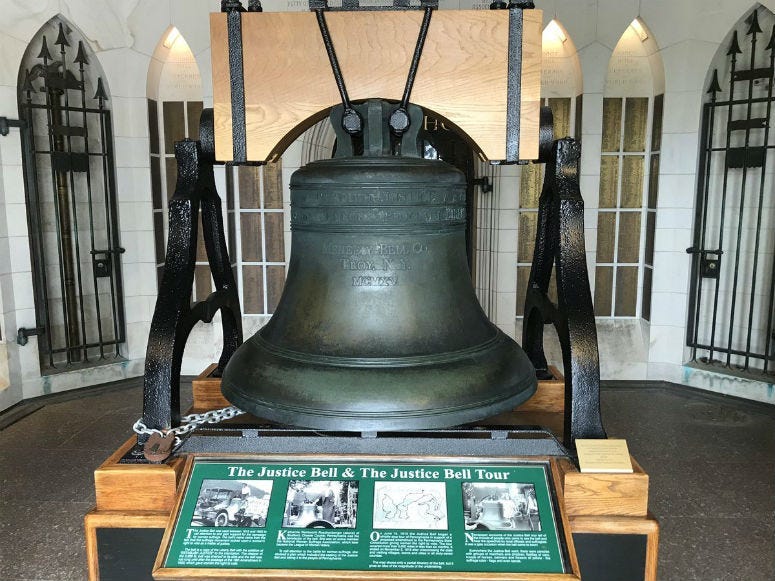 June 24, 2019 06/24/2019 10:04 pm
VALLEY FORGE, Pa.  (KYW Newsradio) — One hundred years ago, Pennsylvania became the seventh state to vote in favor of the 19th Amendment, which gave women the right to vote. A celebration in Valley Forge included the ringing of what’s known as the “Women’s Liberty Bell."

Its official name is the Justice Bell. Commissioned in 1915 by Katherine Wentworth Ruschenberger, it was a replica of the Liberty Bell, minus the crack.

“The clapper was chained and that was to show the silence of the women’s vote, they were not allowed to vote," said Maria Bomersbach with the Washington Memorial Chapel in Valley Forge, which is the current home of the bell and the scene for the celebration.

Pennsylvania’s first lady Frances Wolf unchained the clapper and rang the bell with help from Ruschenberger’s grandniece Alexandra Tatnall, who quoted from her great-aunt’s will.

“The adoption of the 19th Amendment is the fourth outstanding event in the history of the United States. The others are the Declaration of Independence, the adoption of the federal constitution and the Emancipation Proclamation," Tatnall said.

While Pennsylvania ratified the 19th Amendment on June 24, 1919, it wasn’t until August 1920 when Tennessee voted in favor, officially getting over the hurdle of 3/4th of the states.