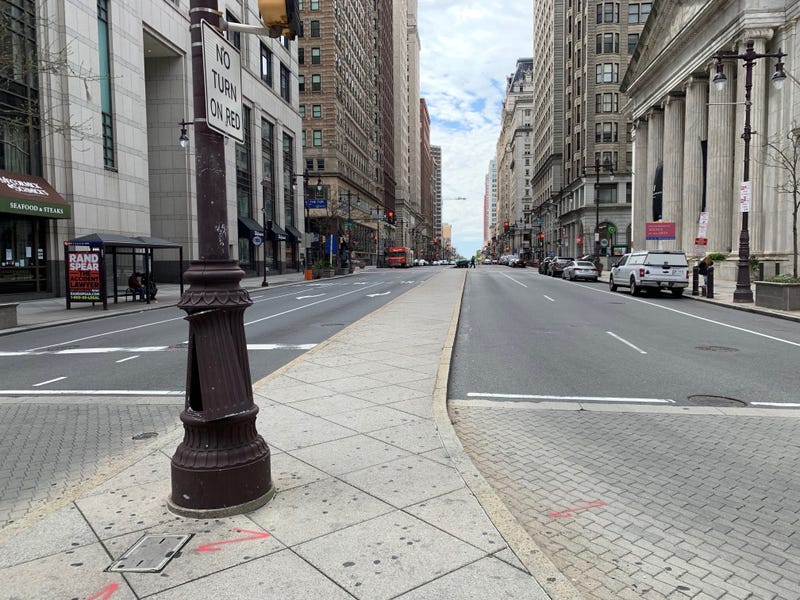 April 26, 2020 04/26/2020 4:15 pm
PHILADELPHIA (KYW Newsradio) — It’s stunning to see Market Street with no traffic and Broad Street with more cars parked than moving but at the intersection of the two, in Dilworth Park, the spring flowers are in glorious bloom and teal-jacketed helpers stand by.

“While downtown is much emptier, it’s not abandoned,” he says.

In some ways, the District’s employees are busier than ever. When shut down stores boarded up their windows with plywood, they became an instant target for graffiti—one of the things the district was created to eliminate. So workers are in the midst of painting the boards black, which makes it less attractive for graffiti artists.

Levy says the district, through Wawa, is providing all 140 employees lunch because the vendors they normally depend on are closed, and it’s provided each of them masks, gloves and hand sanitizer.

The district also decided to put out its annual report, last week, despite the fact that so much has changed since it went to press.

Levy says the report always gives an account of the prior year and the picture of 2019 hasn’t changed so the information remains valid. But, more importantly, Levy says the report shows the strong fundamentals the city has on which to build when it reopens.

But there will be new challenges, too.

Density is one of the things that makes the city desirable, the convenience of being close to amenities and other people. Now, Levy says, it’s become a liability.

Levy says he believes the city’s affordability and the diversity the district has helped painstakingly foster in the downtown employment base are assets that will help the recovery.

“So many of the strong points of the city, once we get past this awful crisis, and this is an awful crisis, the next three months, six months, 12 months, we’re positioned well with a lot of strengths.”