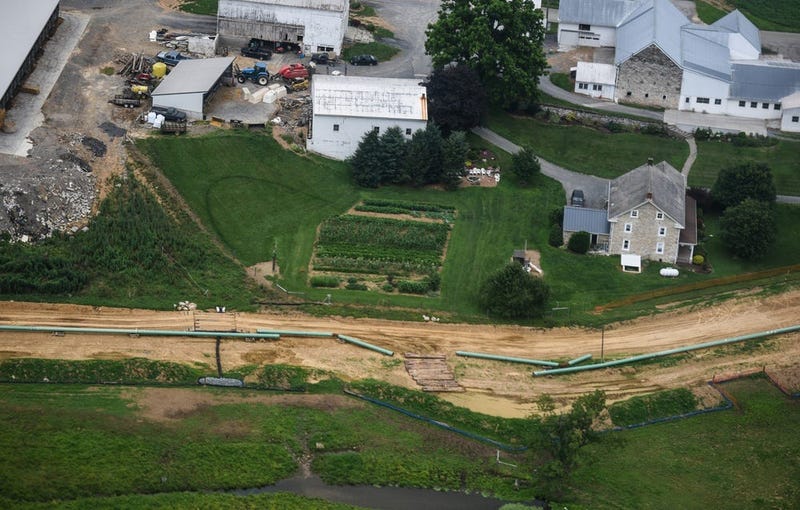 WEST CHESTER, Pa. (KYW Newsradio) — The Chester County District Attorney's Office has filed more charges in connection with the Mariner East Pipeline, including bribery and related charges against the security manager for the company building the pipeline.

These charges come on the heels of two Pennsylvania constables being charged with what DA Tom Hogan calls selling their office and their badge. These charges are connected to that.

Five men, including Frank Recknagel, the security manager for Energy Transfer Partners are facing a long list of charges laid out in a 23-page complaint.

Among those charges: bribery, conspiracy and money laundering.

According to the DA's office, instead of hiring a legitimate security firm, Energy Transfer and Recknagel allegedly set up a scheme to hide payments to state constables so they could have licensed, armed, uniformed Pennsylvania constables provide their security. The complaint says Recknagel called that Energy Tranfer’s "unwritten policy."

Hogan says that calls into question Energy Transfer's pervious statement that the company contracted out security and they had no way of knowing there was a possible violation of the company’s code of conduct that they expect their contractor and employees to follow.

The complaint says two other men, James Murphy, a former state cop who got in trouble for illegally wiretapping his girlfriend, and Richard Lester of a security firm called Raven Knights, used a separate bank account to pay security personnel. Investigators say it allowed them to conceal illegal activities and allowed the constables to commit ethics violatiosn by not reporting the funds.

Also charged are Nikolas McKinnon and Michael Boffo with a security firm called TigerSwan out of North Carolina.

Hogan says while it was a long and in-depth investigation, at the end of the day, in his words, "it's a simple case: a misuse of authority payed for by Energy Transfer."

Energy Transfer Partners responded Tuesday with a statement from spokeswoman Lisa Coleman, saying they would stand by Recknagel and that Hogan's charges will not stand.

"We have learned that an employee was arraigned this morning and charged with alleged wrongdoing related to the hiring of Pennsylvania constables — sworn law enforcement officials — at Energy Transfer’s expense. We believe that these charges do not have any merit and find it troubling that District Attorney Tom Hogan would proceed with charges that we are confident will not stand, creating far-reaching impacts for this employee and his family.

"The Pennsylvania constables in question were hired by an independent, Pennsylvania-based security firm to support the West Whiteland Police Department in its efforts to maintain peace within the community. Local law enforcement never expressed any objection to this security plan when it was discussed and implemented. To now characterize the hiring of Pennsylvania constables as somehow intentionally unlawful is extremely troubling, not only for the individual charged, but also for the community that benefitted from the presence of trained security.

"The District Attorney’s complaint only constitutes allegations — it is not proof of wrongdoing. Energy Transfer will fully support this employee as he seeks the dismissal of the allegation, which again, we believe has no merit, now that he is entitled to due process and a fair hearing."