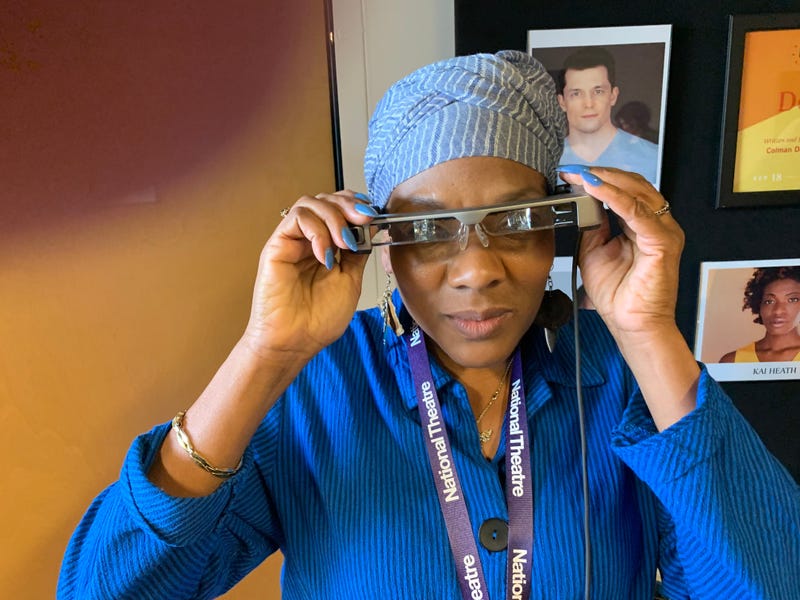 October 20, 2019 10/20/2019 8:30 am
MALVERN, Pa. (KYW Newsradio) — Those who suffer from hearing loss will soon be able to experience a live performance in a whole new way thanks to technology tested by a Chester County theater.

Smart caption glasses were developed with the support of the National Theatre of Great Britain as a way to connect the deaf and those with hearing loss to a more inclusive theater experience.

The glasses, which display real-time closed captioning of the actors’ script, were audience-tested during a just-completed two-week pilot program at People’s Light in Malvern.

Marci Bramucci, with People’s Light, said the glasses are a huge step up from a closed-captioning board set off to the side of the stage.

“Seeing the text of the play within the field of the glasses so you don’t need to look away,” Bramucci explained. “It’s directly within your field of vision as you are watching a performance.”

Lisa Sonneborn, director of media arts and culture at Temple University’s Institute on Disabilities, found the British trial online and connected the parties.

“What they were doing with smart caption glasses was absolutely ground breaking," said Sonneborn. “We got them on the phone and said we were very interested in their work and might we be able to partner.”

The technology, developed with support of the National Theatre of Great Britain, displays a synchronized transcript of a play’s dialogue directly onto the lenses of the Smart Caption Glasses via Wi-Fi.

Cheryl Johnson, of West Philadelphia, was one of the pilot participants for a live performance at the Malvern theatre this month. She has lost hearing in her right ear and has limited hearing in her left.

“I have the freedom to move around and still be a part of the theater experience,” she said. “It’s amazing!”

The National Theatre's Tabitha Allum said a year-long trial with eight different shows in London showed the glasses were a hit.

“We’ve been really encouraged by the number of people who’ve tried the glasses and then subsequently booked for more shows with the glasses," Allum said. "That really shows to us that it’s a service that they value and that they’re getting something out of it that they might not have got if they had just come to the theater without being able to access the closed captioning.”

People’s Light will start offering the glasses free for public use for performances beginning in January.