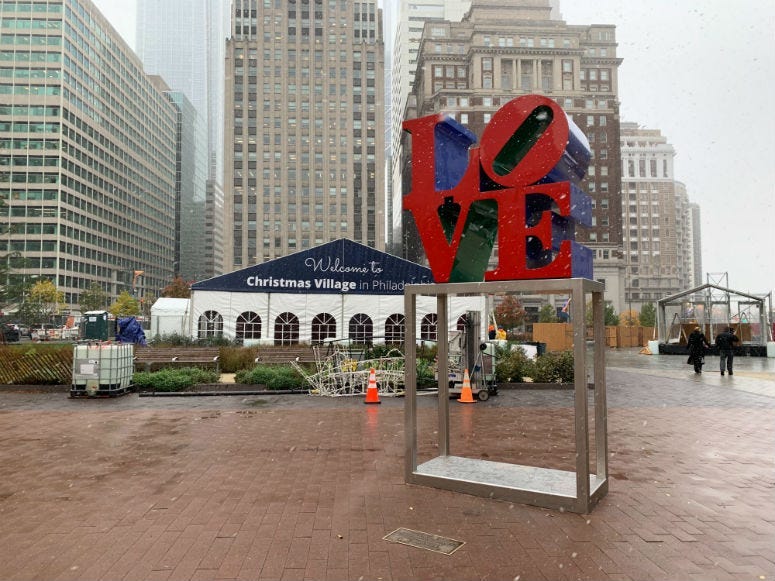 Andrew Emma, manager of LOVE Park, stopped by Tuesday to check out how the build-out was progressing three days in.

"They're putting up some of the food vending tents, they're starting to build out some of the vendor huts, there's over 75 vendor huts. The stage, which is gonna have different musical events and performances is here. Santa's booth right behind that is going up," he said.

And there's something new this year: A big shipping container is being converted into a gift shop.

Workers had to contend with freezing cold and snow on Tuesday, but they didn't seem to mind.

"No, we're prepared to work outside. We knew what it was today, I mean all you had to do was look at the weather. KYW, right?" one worker joked.

"I have my own ecosystem going on under here but I'd say probably like five to six layers, from Under Armour to Haines long johns. I'm pretty toasty right now. And with the poncho over it, it just hermetically seals everything in," said another worker.

Work could be completed as early as this weekend, and vendors are scheduled to begin setting up by the middle of next week just ahead of the Nov. 23 preview.

Christmas Village debuted in 2008 and has grown to become one of the most popular holiday spots in the city, where vendors sell items from around the world. This year, visitors can look for an expanded beer garden and more food offerings.