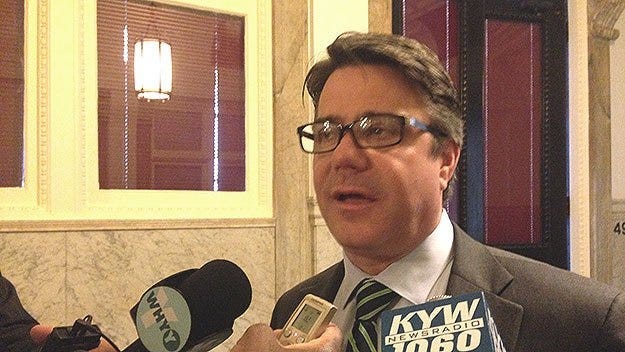 Dressed in a dark gray suit with his hands clasped in front, 50-year-old Henon denied the charges filed against him. Federal prosecutors say he was a pawn for union leader Dougherty, handling City Council matters as Dougherty wanted, in exchange for a union salary and tickets to Eagles games and the like.

"This is a travesty of justice," said Henon’s defense attorney, Brian McMonagle. "When he ran for public office, he ran as a union member to fight and be a voice for people who go to work every day, who are part of a union, who built these skyscrapers. And when he got to City Council, he reported every single dollar, every cent that he was paid, as a union employee. Never lied about it, never committed fraud about it.

"He's going to continue to fight for the people who put these buildings up and probably out working in the cold right now."

Looking forward to continuing my work on behalf of the people of the City of Philadelphia at today's Council Meeting! #PHLCouncil pic.twitter.com/dTecVkQ8fh

⁦@BobbyHenon⁩'s empty desk. He did not attend today's ⁦@PHLCouncil⁩ session despite assurances he would pic.twitter.com/8J7Lgk6Abb

"This never had anything to do with money," he added, "this had to do with loyalty to a brotherhood that he's a member of."

Henon was released on his own recognizance of $50,000 and had to turn in his passport. He can only travel in Pennsylvania and New Jersey, unless otherwise given permission by a judge.

His next court date has not yet been scheduled.