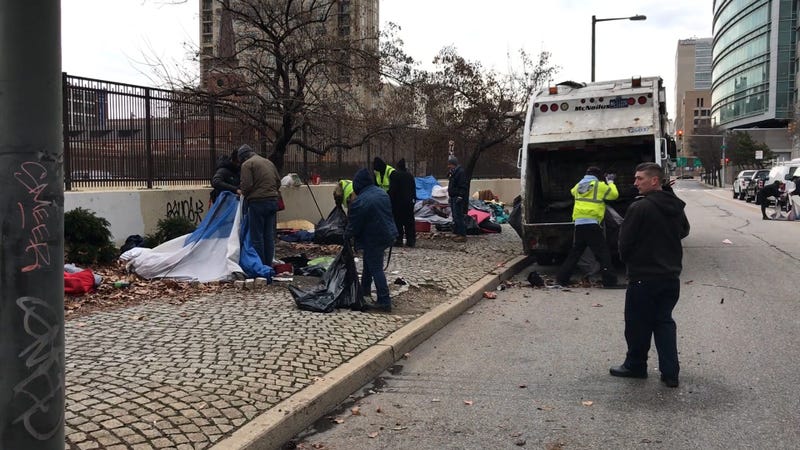 January 6, 2020 01/06/2020 6:28 pm
PHILADELPHIA (KYW Newsradio) — After several months, a homeless encampment near 18th and Vine streets has been dismantled.
City crews from Parks and Recreation, the Streets Department and the Office of Homeless Services broke down more than a dozen tents Monday morning, sweeping up trash and cleaning the block along the way.

David Holloman, chief of staff for Homeless Services, said the residents of the encampment have been notified every day for 45 days that they must move by Jan. 6. City officials offered services to the few still living in the temporary tent city.

Holloman said the encampment grew from about three tents to 25 over time.

“I always get asked how many people were out here. It's very fluid because many of these tents were unoccupied,” he said.

But other people moved into the empty tents. City officials believe this encampment was a direct result of the opioid crisis.

Fortunately, Holloman said, there are more homeless services available in the winter, so there was space available for them.

“We wanted to make sure people were properly placed, that nobody was cited for any criminal violations,” said Marsha Cohen, executive director of the Homeless Advocacy Center, who was also onsite, “and that people's belongings were not taken without folks having an opportunity to take them with them.”

However, Cohen said she saw crews throwing all of the belongings directly into the trash truck. And contrary to what the city has said, Cohen didn’t witness any drug paraphernalia in the encampment.

“Despite what we've been hearing, it does not appear to me that there's any kind of sustained drug activity,” she added.

Otherwise, Cohen said the homeless people were treated respectfully during the dismantling.