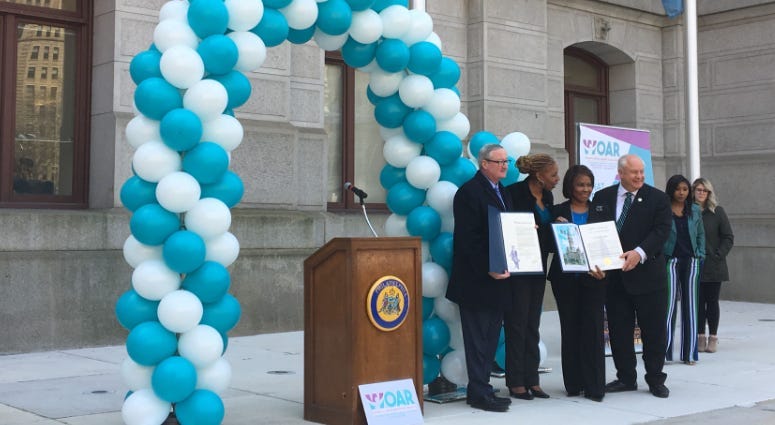 Representatives from Women Organized Against Rape (WOAR) emphasized at City Hall Thursday that there is help available for survivors, like Brittany Koole.

A survivor of sexual trauma, Koole said it took her a while to realize her relationship was unhealthy.

"You think someone loves you, and in the meantime, you don’t realize you’re getting abused," she recalled, saying how the situation gradually escalated. "I had to call my cousin in the middle of the night to come get me because I was locked out of my own house without clothing. I would call my friends and ask if I could stay on their couch for three days because I was scared."

Koole admitted she was unaware of the abuse.

"I didn’t know for a long time. I didn’t realize," she continued. "I was having some suicidal thoughts. I couldn’t put my finger on it."

Today @PhillyMayor Jim Kenney proclaimed April 11th, 2019 as Teal Day in the City of Philadelphia and commend the work that @WOARphila does to support survivors of sexual violence.Thank you for being a #WOARRIOR Mayor Kenney!! pic.twitter.com/rMcQ7FcFIz

Dr. Monique Howard, executive director of WOAR, explained an act doesn’t have to necessarily be rape to be inappropriate.

"What we’re used to hearing about are violent episodes of rape, but there’s a continuum of things that go on," she said. "There’s street harassment and catcalling in the street; there’s being touched without consent."

She said it’s important for people in those situations to understand it’s not their fault.

"You’re being groomed to think [that behavior> is OK," she said. "And you realize at some point that the behaviors, the activities, the way that you’re spoken to, the assault that takes place, is not normal."

Most importantly, there is help, she noted, which is the main point WOAR wanted to get across for Sexual Assault Awareness Month.

"The most important thing is that organizations like WOAR believe you, and we have the services to provide support to individuals who have been sexually assaulted," she said.