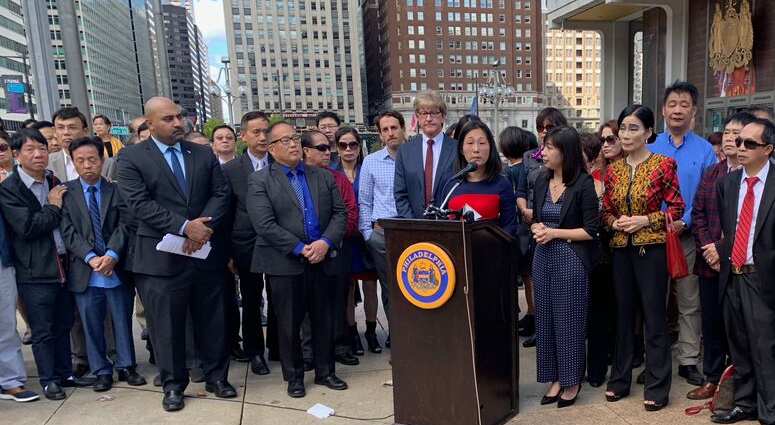 October 4, 2019 10/04/2019 7:11 pm
PHILADELPHIA (KYW Newsradio) — The City of Philadelphia will no longer enforce a 14-year-old ordinance that requires businesses on primarily residential streets to close at 11 p.m.

A group of Chinese restaurant owners announced the settlement Friday in a federal discrimination suit against the city, claiming they were unfairly targeted by the law.

Business owner Ling Lin said that when her life was threatened during a late-night robbery, police cited her for being open late. She became afraid to call police, and she said her children would cower in fear whenever an officer came to her establishment.

"We have to shut down our store because of this discriminatory ordinance," she said, "and many of the plaintiffs and Chinese restaurant owners, they all have experienced this."

Ling is one of 23 people who sued the city last year, after data showed that 96 percent of citations written for violating the 2005 so-called "11 p.m. ordinance" went to Chinese restaurants.

Attorney Patricia Yan, with the New York-based Asian American Legal Defense and Education Fund (AALDEF), said a four-year study showed it was enforced not only selectively, but incorrectly.

"A quarter of tickets were issued to Chinese restaurants that were not even subject to the ordinance," she added. "It was vague, confusing and discretionary, leading to not only overwhelming selective enforcement against Chinese Americans, but also an alarmingly high error rate."

The plaintiffs said they turned to AALDEF after the American Civil Liberties Union in Philadelphia refused to represent them. The ACLU declined comment.

Attorneys noted there were many more Chinese restaurants that were targeted but were too intimidated to join the suit.

The Pepper Hamilton firm also represented them pro bono. The city admits no liability in the settlement but agreed to pay $265,000 in compensation for the restaurant owners.

"We hope these measures will bring justice for the plaintiffs and help prevent discriminatory treatment against this community," he added.